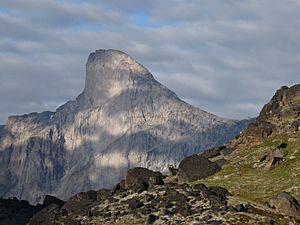 Cloud shadows on the cliff face of Mount Thor

Mount Thor, officially gazetted as Thor Peak, is a mountain with an elevation of 1,675 metres (5,495 ft) located in Auyuittuq National Park, on Baffin Island, Nunavut, Canada. The mountain is located 46 km (29 mi) northeast of Pangnirtung and features Earth's greatest vertical drop of 1,250 m (4,101 ft), with the cliff overhanging at an average angle of 15 degrees from vertical. Despite its remoteness, this feature makes the mountain a popular rock climbing site. Camping is allowed, with several designated campsites located throughout the length of Akshayuk Pass. For climbers looking to scale Mount Thor, there is an established campsite a few kilometres north of its base, complete with windbreaks and emergency shelters.

The mountain was named for Thor, the Norse thunder god.

Mount Thor is part of the Baffin Mountains which in turn form part of the Arctic Cordillera mountain range. The mountain consists of granite.

All content from Kiddle encyclopedia articles (including the article images and facts) can be freely used under Attribution-ShareAlike license, unless stated otherwise. Cite this article:
Mount Thor Facts for Kids. Kiddle Encyclopedia.