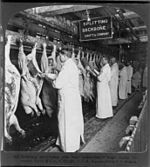 The Muckraker Upton Sinclair wrote a book called The Jungle, about meat-packing factories.

Muckrakers was a term for the group of people who wrote books and newspaper articles in the United States around 1900. Most of their books were about showing how bad things were in "Gilded Age" in America. Some things they wrote about were the power of big business, unclean practices in factories, and the condition of poor people. The books the Muckrakers wrote led to changes in America during the Progressive Era, such as the Pure Food and Drug Act of 1906 and the breakup of the Standard Oil company.

The following people were among the Muckrakers:

All content from Kiddle encyclopedia articles (including the article images and facts) can be freely used under Attribution-ShareAlike license, unless stated otherwise. Cite this article:
Muckrakers Facts for Kids. Kiddle Encyclopedia.