Lincoln Austin Steffens (April 6, 1866 – August 9, 1936) was an American investigative journalist and one of the leading muckrakers of the Progressive Era in the early 20th century. He launched a series of articles in McClure's, called "Tweed Days in St. Louis", that would later be published together in a book titled The Shame of the Cities. He is remembered for investigating corruption in municipal government in American cities and for his leftist values.

Steffens was born in San Francisco, California, the only son and eldest of four children of Elizabeth Louisa (Symes) Steffens and Joseph Steffens. He was raised largely in Sacramento, the state capital; the Steffens family mansion, a Victorian house on H Street bought from merchant Albert Gallatin in 1887, would become the California Governor's Mansion in 1903. 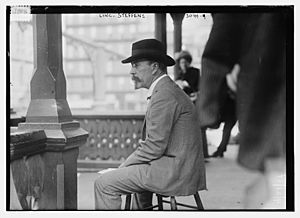 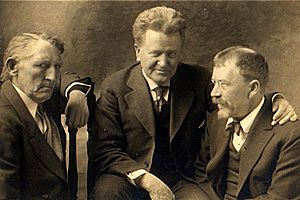 Steffens began his journalism career at the New York Commercial Advertiser in the 1890s, before moving to the New York Evening Post. He later became an editor of McClure's magazine, where he became part of a celebrated muckraking trio with Ida Tarbell and Ray Stannard Baker. He specialized in investigating government and political corruption, and two collections of his articles were published as The Shame of the Cities (1904) and The Struggle for Self-Government (1906). He also wrote The Traitor State (1905), which criticized New Jersey for patronizing incorporation. In 1906, he left McClure's, along with Tarbell and Baker, to form The American Magazine. In The Shame of the Cities, Steffens sought to bring about political reform in urban America by appealing to the emotions of Americans. He tried to provoke outrage with examples of corrupt governments throughout urban America.

From 1914 to 1915 he covered the Mexican Revolution and began to see revolution as preferable to reform. In March 1919, he accompanied William C. Bullitt, a low-level State Department official, on a three-week visit to Soviet Russia and witnessed the "confusing and difficult" process of a society in the process of revolutionary change. He wrote that "Soviet Russia was a revolutionary government with an evolutionary plan", enduring "a temporary condition of evil, which is made tolerable by hope and a plan."

After his return, he promoted his view of the Soviet Revolution and in the course of campaigning for U.S. food aid for Russia made his famous remark about the new Soviet society: "I have seen the future, and it works", a phrase he often repeated with many variations. The title page of his wife Ella Winter's Red Virtue: Human Relationships in the New Russia (Victor Gollancz, 1933) carries this quote.

His enthusiasm for communism soured by the time his memoirs appeared in 1931. The autobiography became a bestseller leading to a short return to prominence for the writer, but Steffens would not be able to capitalize on it as illness cut his lecture tour of America short by 1933. He was a member of the California Writers Project, a New Deal program.

He married the twenty-six-year-old socialist writer Leonore (Ella) Sophie Winter in 1924 and moved to Italy, where their son Peter was born in San Remo. Two years later they relocated to the largest art colony on the Pacific Coast, Carmel-by-the-Sea, California. Ella and Lincoln soon became controversial figures in the leftist politics of the region. When John O’Shea, one of the local artists and a friend of the couple, exhibited his study of "Mr. Steffens’ soul", an image which resembled a grotesque daemon, Lincoln took a certain cynical pride in the drawing and enjoyed the publicity it generated.

In 1934, Steffens and Winters helped found the San Francisco Workers' School (later the California Labor School); Steffens also served there as an advisor. 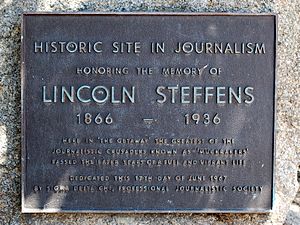 A marker commemorating Steffens' retirement home near the intersection of San Antonio and Ocean avenues in Carmel, California.

Steffens died of a heart condition on August 9, 1936, in Carmel, California.

In 2011 Kevin Baker of The New York Times lamented that "Lincoln Steffens isn’t much remembered today".

All content from Kiddle encyclopedia articles (including the article images and facts) can be freely used under Attribution-ShareAlike license, unless stated otherwise. Cite this article:
Lincoln Steffens Facts for Kids. Kiddle Encyclopedia.