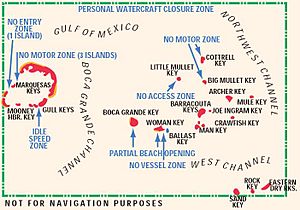 The location of Barracouta Keys and Marquesas Keys in the Key West National Wildlife Refuge.

The Mule Keys, are a group of scattered islets in the Florida Keys in Monroe County, Florida, United States. They are between 3 and 12 mi (4.8 and 19.3 km) west of Key West, separated from it by the Northwest Channel. On the west, they are separated from the Marquesas Keys by the 6-mile (9.7 km) wide Boca Grande Channel. They belong to the outlying islands of the Florida Keys. Administratively, they are an unincorporated area of Monroe County. The islets are part of the Key West National Wildlife Refuge. The area of the islets totals 1.07 sq mi (2.8 km2), of which 1.02 sq mi (2.6 km2) are land area and 0.05 sq mi (0.13 km2) inland water bodies (on three of the keys). The islets are uninhabited except for Mule Key, for which the census of 2000 lists one housing unit with a population of two (park rangers or coast guard).

The United States Government has placed most of this area off limits, as a part of the Key West National Wildlife Refuge. It is even prohibited to anchor off Man Key and Woman Key in the sand, although Woman Key was a popular destination for day trippers from Key West in the past, which Boca Grande Key still is. Anchoring off the south part of Boca Grande Key is also prohibited; it is permitted only off the northwest portion.

The easternmost islet, Mule Key, is 2.7 mi (4.3 km) west of Sunset Key which is part of Key West city. The westernmost (and largest) islet, Boca Grande Key, is 6 miles (10 km) east of the Marquesas Keys.

7 mi (11 km) south of Mule Key, separated from the Mule Keys by West Channel, are three notable submerged reefs, from east to west:

All content from Kiddle encyclopedia articles (including the article images and facts) can be freely used under Attribution-ShareAlike license, unless stated otherwise. Cite this article:
Mule Keys Facts for Kids. Kiddle Encyclopedia.