Kids Encyclopedia Facts
Not to be confused with the Marquesas Islands (French Polynesia) in the Pacific Ocean.

The Marquesas Keys form an uninhabited island group about 20 miles (32 km) west of Key West, four miles (6 km) in diameter, and largely covered by mangrove forest. They are an unincorporated area of Monroe County, Florida and belong to the Lower Keys Census County Division. They are protected as part of the Key West National Wildlife Refuge. The Marquesas were used for target practice by the military as recently as 1980. 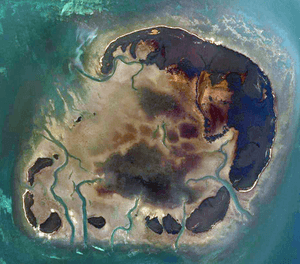 Satellite image of the Marquesas Keys 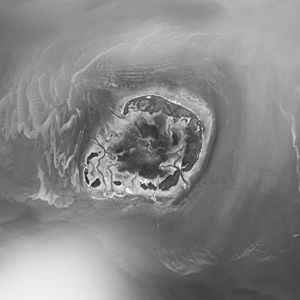 The central lagoon is called Mooney Harbor. The northernmost key is the largest and has a strip of sandy beach free of mangrove. In the past it was known as "Entrance Key". It surrounds the lagoon in the north and east. Adjoining in the south are smaller keys such as Gull Keys, Mooney Harbor Key, and finally about four unnamed keys in the southwest corner of the group. Older charts show that two of these keys once were named "Button Island" and "Round Island".

The islands are best known for their excellent sport fishing.

All content from Kiddle encyclopedia articles (including the article images and facts) can be freely used under Attribution-ShareAlike license, unless stated otherwise. Cite this article:
Marquesas Keys Facts for Kids. Kiddle Encyclopedia.