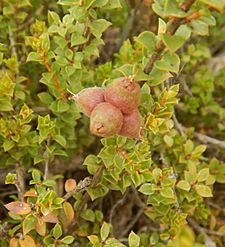 Kunzea pomifera was first formally described in 1855 by Ferdinand von Mueller from specimens collected "on the sandy shores and on rocks at St. Vincent's Gulf and Rivoli Bay. The description was published in Mueller's book, Definitions of rare or hitherto undescribed Australian plants. The specific epithet (pomifera) is derived from the Latin words pomum meaning "fruit of any kind" or "apple" and fero meaning "to cover or bear".

The berries produced by these plants are about 1 centimetre (0.39 in) in diameter, green with a tinge of red at maturity and have a flavour of a spicy apple. Crunchy in texture, muntries contain up to four times more antioxidants than blueberries and provide natural waxes that are good for skin nourishment.

Kunzea pomifera was grown in England in 1889. It was one of the first species of Australian plant introduced into cultivation in England.

While muntries are a groundcover in the wild, commercial growers have successfully managed to trellis the plants. Trellised muntries allow easier access for harvesting and management. It also allows a more efficient use of orchard space.

Muntrie plants can be trained quite easily through weaving the growing plant through and along trellis wires, using plant ties to secure them.

Natural rainfall levels of wild populations range from 500–800 millimetres (20–31 in). For cultivation it is suggested that waterlogging and extremely dry soils should both be avoided. Moderate restriction of water in the early spring may be beneficial in stimulating flowering and reducing competitive vegetative growth.

Anecdotal evidence suggests that overwatering muntries may result in a dilution of flavour in the muntrie berries.

All content from Kiddle encyclopedia articles (including the article images and facts) can be freely used under Attribution-ShareAlike license, unless stated otherwise. Cite this article:
Muntries Facts for Kids. Kiddle Encyclopedia.