Museum of the American Railroad facts for kids

The Museum of the American Railroad, formerly known as the Age of Steam Railroad Museum, is a railroad museum in Frisco, Texas. The museum has a large collection of steam, diesel, passenger, and freight railroad equipment, and is noted for allowing guests to walk through some of the equipment on guided tours. The President and CEO is Bob LaPrelle who has worked there for over 30 years now. It was established in 1963 for the Texas State Fair as the Southwest Railroad Historical Society.

The museum began as a small exhibit at the State Fair of Texas in 1963, and continued as a staple of the annual fair, officially becoming a museum in 1986. It remained at its original site at Fair Park until closing in November 2011. The museum has fully relocated to Frisco, Texas; the move was based on a strategic plan, called Visions 2006, which called for a comprehensive reorganization of the museum, including new facilities, new governance and new programs. The museum's offices and some exhibits are temporarily housed at the Frisco Heritage Museum while construction continues on the museum's new location two blocks south. A new model train layout opened in July 2018 in the Frisco Discovery center next to the Museum's site, the gift shop and ticket sales for the guided tours have since been moved to the new layout from the Heritage museum. 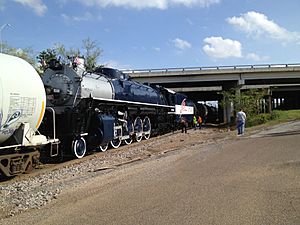 Frisco 4501 in Irving,TX during move to Frisco, TX 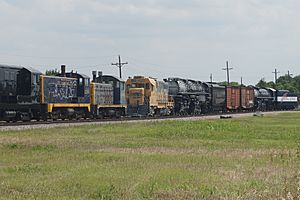 The Museum of the American Railroad's Frisco, Texas, location in June 2019

The items in the collection are as follows: 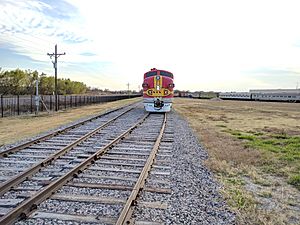 AT&SF #49 at the Museum of the American Railroad in Frisco, TX

The museum opened a permanent exhibit called TrainTopia – A Railroad Odyssey in Miniature, located in the Frisco Discovery Center adjacent to the museum. This is a massive 2,500-square-foot professionally-built model railroad layout donated to the museum by the Sanders family, and supported by a $300,000 donation from the Ryan Foundation to finance moving the layout and preparing the exhibit space. The scene spans Texas to Arizona, and includes details such as the dramatic rock formations of the Four Corners region near New Mexico, an animated downtown Dallas street scene, the Palo Duro Drive-In Theater complete with a movie playing, West Texas refineries, and working saw mills in Colorado. A custom light show changes the exhibit from day to night. The rolling stock of G scale trains includes hundreds of pieces of locomotives and cars, most finely-crafted by LGB in Germany.

All content from Kiddle encyclopedia articles (including the article images and facts) can be freely used under Attribution-ShareAlike license, unless stated otherwise. Cite this article:
Museum of the American Railroad Facts for Kids. Kiddle Encyclopedia.