Myaree is a suburb of Perth, Western Australia, located within the City of Melville. Myaree gets its name from an Aboriginal word meaning foliage. 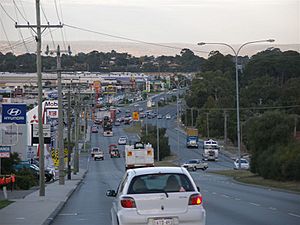 Myaree is a predominantly light industrial area. When it was developed, roads were named after soldiers killed in World War I and early settlers in the area.

All content from Kiddle encyclopedia articles (including the article images and facts) can be freely used under Attribution-ShareAlike license, unless stated otherwise. Cite this article:
Myaree, Western Australia Facts for Kids. Kiddle Encyclopedia.