Myriam Raquel Hernández Navarro (born May 2, 1965, in Ñuñoa, Santiago), popularly known as Myriam Hernández, is a Chilean singer-songwriter and television presenter. She is known throughout the Spanish-speaking world for her romantic ballads.

Hernández began her career in the late 1980s. Her first track was "Ay Amor." At age 11 she debuted on the program "Generación joven," followed soon after by "La Pandilla," both part of Televisión Nacional de Chile. Based on this she was offered a role in the soap opera "De cara al mañana," where she appeared in five episodes.

The following year, as a solo artist, she entered into the "Ranking Juvenil" (Juvenile Ranking) of Canal 13's "Sábados Gigantes" program, hosted by Don Francisco. At 18 she was named Artista Revelación (Best New Artist) by the Chilean press before having even recorded a single album.

In Chile, in October 1988, Hernández released her first album under record label EMI entitled "Myriam Hernández". In Chile the record got her the Disco de Oro, and would later go quadruple platinum in – among other countries – the United States, Colombia, Peru, Ecuador, Bolivia, Puerto Rico, Costa Rica, and Panama. Thus began her international career. Two tracks on this album, "Ay Amor" (Oh My Love) and "El Hombre que Yo Amo" (The Man I Love), spent months at the top of music charts in Latin America and the U.S. In February 1989 she was a guest artist and jury member at the Festival de Viña del Mar.

In 1989, the Asociación de Periodistas de Espectáculos de Chile awarded Hernández the APES award for Best Female Performer and her album received the Mejor Producción Discográfica (Best Record) award. In July 1989, Billboard's Hot Latin scored her first success with "El Hombre que Yo Amo," and soon after in December her album was among the 10 best selling albums in the Latin world. 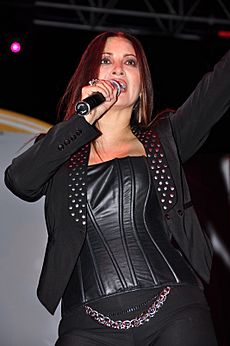 In Los Angeles in April 1989, Hernández began recording a second album, produced by Humberto Gatica, and on which collaborated David Foster, Jason Scheff (Chicago Group) and Lucho Gatica as executive producer. Noteworthy songs included "Te Pareces Tanto a Él" (You Look so much like Him), "Tonto" (Fool), "Mío" (Mine), "Peligroso Amor" (Dangerous Love), and "Herida" (Hurt, composed by Myriam Hernández). The album remained on the Billboard charts from May 1990 to July 1991, with "Peligroso Amor" occupying the No. 1 spot for several weeks, followed by "Te Pareces Tanto a Él" and "Herida." This album held the No. 1 spot for Top Latin Albums for a record 18 consecutive weeks. "Peligroso Amor," whose video, produced by Luis de Lllano (Televisa-Mexico), was nominated for Billboard magazine's Best Latin Video.

Once again in 1991 Hernández was invited to the Viña del Mar International Song Festival where she received both the Antorcha and Gaviota de Plata awards. In Los Angeles in 1992 she recorded her third album produced by Spaniard Juan Carlos Calderón and mixed by Humberto Gatica. All the songs were written by Juan Carlos Calderón, with the exception of "Mira" (Look), co-written by Myriam and Juan Carlos. The album's hits were "Un Hombre Secreto" (A Secret Man), "Se Me Fue" (Gone), and "Si no Fueras Tú" (If You Weren't You). The album went Gold and Platinum in the US, Mexico, Central America, Venezuela, Colombia, Ecuador, Peru, and Chile. She also released albums in Japan, Thailand, Taiwan, and the United Arab Emirates.

In May 1992, Hernández performed at the Acapulco Festival, accompanied on the piano by Juan Carlos Calderón. The video for the song "Se me fue" was filmed in Los Angeles and was directed by U.S.-based Argentine director Gustavo Garzón.

Also in 1992, Hernández began a new project by founding the "School of Vocal Arts" along with her voice instructor, speech therapist Ricardo Álvarez. Among the professional artists to have gone through this school are Beto Cuevas, Lucybell, and Kudai. Her fourth album, released in 1994, was also produced in Los Angeles where she worked again with producer Humberto Gatica. From this album the song "Ese Hombre" (That Man), by Chilean songwriter María Angélica Ramírez, won ASCAP's "Best Pop Ballad" of the year, as well as first place on the Billboard charts. In 1996, artist Paul Anka invited her to collaborate on an album of all-time Spanish hits called "Amigos" (Friends), on which they performed together the song "Tu Cabeza en Mi Hombro" (a Spanglish cover of Put Your Head on My Shoulder). Figures such as Céline Dion, Ricky Martin, Julio Iglesias, and Juan Gabriel also collaborated on that album, which was released by Sony.

In 1998, Hernández released "Todo el Amor" (All the Love), her newest and fifth album. Produced by Humberto Gatica and achieving success in all Spanish-language markets, including once again the United States, where the first single, "Huele a Peligro" (It Smells Like Danger), by Armando Manzanero, quickly climbed to the first spot of Billboard magazine's Hot Latin Tracks. It also included hits such as "Deseo" (I Wish), by Mónica Naranjo, and "La Fuerza del Amor" (The Strength of Love), by Estéfano. The music video for the song "Huele a Peligro" was directed in Chile by director Germán Bobe.

In 1998 Hernández was a guest on the Chilean program "Gigante y Ud.," along with Don Francisco, for two months. In the June 1999 issue of People En Español she was elected one of 25 Latin beauties, together with Ricky Martin and Spanish actor Antonio Banderas. In 2000 she released "+ y Más" (+ and More) with a large selection of producers and authors such as Kike Santander, Rudy Perez, Estéfano, Humberto Gatica, and Lester Mendez. Notable songs included "Mañana" (Tomorrow), "Quién Cuidará de Mí" (Who Will Take Care of Me), "Si yo me Vuelvo a Enamorar" (If I fall in love again), and "Leña y Fuego" (Wood and Fire). The record went Gold and Platinum in various Latin American countries. The video for the song "Quién Cuidará de Mí" was directed by Mexican director Carlos Markovic. In February 2001, at the Viña del Mar International Song Festival, she was awarded the Gaviota de Plata and Gaviota de Oro (Silver and Golden Seagulls) by the public.

In October 2001 Hernández gave two concerts at Santiago de Chile's Municipal Theater, a recording of which, "El Amor en Concierto" The Love at Concert, was released in Chile where it went Gold and Platinum. Based in Miami since 2000, she decided to make a foray into designer modeling photography for Italian brand Santini Mavardi and also agreed for the first time to associate her name with a commercial brand and act in an ad campaign for Procter & Gamble's "Head & Shoulders."

In 2002, Hernández debuted as host of the Viña del Mar International Song Festival, a competition held every year in Chile and in which she participated until 2006 alongside entertainers Antonio Vodanovic, Ricardo Montaner, and Sergio Lagos. She became the only woman to host for 25 nights with 3 different entertainers. She also was an entertainer on Chilean television programs such as "La Movida del Festival," "Con Mucho Cariño," "Protagonistas de la Música," and "La Noche del Mundial."

In 2004, Hernández released Huellas (Traces), a collection of her greatest hits including three never before-released songs. Armando Manzanero composed a new hit for her, "No te He Robado Nada" (I Took Nothing From You), and Myriam Hernández and her son Jorge Ignacio, then only eight, composed the song "He Vuelto por Ti" (I Have Come Back for You). The album included a new version of the song "Mio" recorded with Argentine group Los Nocheros as well as the song "El Amor de mi Vida" (The Love of my Life) (written by Myriam and Chilean hip-hop band Los Tetas) recorded with that band. Huellas was released across Latin America and went Gold and Platinum. She also released her first DVD. At the end of 2005 she produced her first DVD-CD of a live performance entitled Contigo en Concierto (With You in Concert).

In 2007, Hernández released the covers' album Enamorándome (Falling in Love). In February 2010 Myriam sang "Rescátame" in Festival Antofagasta Junto al Mar. This song will be appear in her new album.

All content from Kiddle encyclopedia articles (including the article images and facts) can be freely used under Attribution-ShareAlike license, unless stated otherwise. Cite this article:
Myriam Hernández Facts for Kids. Kiddle Encyclopedia.