Mystic Seaport Museum or Mystic Seaport: The Museum of America and the Sea in Mystic, Connecticut is the largest maritime museum in the United States. It is notable for its collection of sailing ships and boats and for the re-creation of the crafts and fabric of an entire 19th-century seafaring village. It consists of more than 60 historic buildings, most of them rare commercial structures moved to the 19-acre (0.077 km2) site and meticulously restored.

The museum was established in 1929 as the "Marine Historical Association". Its fame came with the acquisition of the Charles W. Morgan in 1941, the only surviving wooden sailing whaler. The Seaport was one of the first living history museums in the United States, with a collection of buildings and craftsmen to show how people lived; it now receives about 250,000 visitors each year. 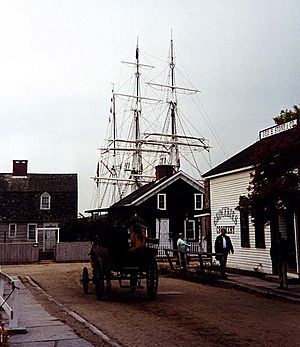 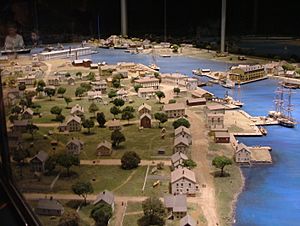 Scale model of Mystic, Connecticut as it was about 1870

The Preservation Shipyard is an important part of the museum, where traditional tools and techniques are used to preserve the Museum's collection of historic vessels, including the 1841 whaleship Charles W. Morgan. A replica of the slave ship La Amistad was constructed in the shipyard and launched in 2000. Amistad departed from New Haven on June 21, 2007 on a 14,000-mile (23,000 km) transatlantic voyage to Great Britain, Lisbon, West Africa, and the Caribbean, marking the Atlantic trade and slave route to commemorate the 200th anniversary of the end of slavery in Great Britain.

The 19th-century seafaring village contains nearly all the types of general and specialized trades associated with building and operating a sailing fleet. They include a chandlery, sail loft, ropewalk, cooperage, shipping agent's office, printing office, bank, and others. Also included is The Spouter Tavern, open seasonally and serving "travelers' fare". Each building is used both to show the original activity and to display examples of what was sold or constructed; the nautical instrument shop, for example, displays sextants, nautical timepieces, and so forth, while demonstrations at the cooperage show how casks are assembled.

Additional buildings house more exhibits. One is a 1⁄128 scale model of the entire Mystic River area as it appeared around 1870, complete down to the outhouse behind every residence; the model is 40 feet (12 m) long. Another contains a collection of carved ship figureheads. Also among the museum's buildings is a planetarium which demonstrates how seamen used stars for navigation. 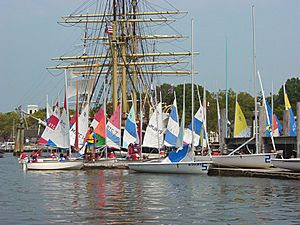 Children learning to sail in JY15s and Dyer Dhows

Sailing instruction is also offered, as well as tourist rides in various historical small craft. Such tours give a good overview of historic ships at their moorings. Mystic Seaport's music program is unusual, as it prominently features sea shanties in their original contexts as work songs. The Mystic Seaport Sea Music Festival is held annually in June and is among the oldest and largest in the United States.

All content from Kiddle encyclopedia articles (including the article images and facts) can be freely used under Attribution-ShareAlike license, unless stated otherwise. Cite this article:
Mystic Seaport Facts for Kids. Kiddle Encyclopedia.