The Museum of Jewish Heritage, located in Battery Park City in Manhattan, New York City, is a memorial to those who perished in the Holocaust. The building, designed by Roche-Dinkeloo, is topped by a pyramid structure called the Living Memorial to the Holocaust. The museum opened in 1997. More than 1.5 million visitors from all over the world have visited the museum. The mission statement of the museum is "to educate people of all ages and backgrounds about the broad tapestry of Jewish life in the 20th and 21st centuries — before, during, and after the Holocaust." 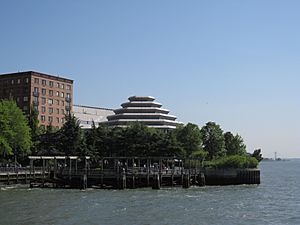 The pagoda-like structure of the museum

The Museum of Jewish Heritage was incorporated and chartered in 1984, dedicated in 1986, and built between 1994 and 1997 in New York City's Battery Park City. The museum's $21.5 million building, designed by architect Kevin Roche opened to the public on September 15, 1997. David Altshuler was the founding Director of the Museum, a position he held from 1984 until December 1999, when he left to become president of the Trust for Jewish Philanthropy.

U.S. President Jimmy Carter, with the support of Mayor Ed Koch, proposed placing the national memorial in New York City instead of Washington, D.C., but it was ruled out. Koch's appointment of a Task Force on the Holocaust in 1981 was crucial. The Task Force, "which evolved in 1982 to the New York Holocaust Commission," recommended the creation of a museum. Carter, in 1978, created the President's Commission which placed the issue on the US government's agenda. The agenda remained present until it became a reality in President Bill Clinton’s term on 1993.

Before the museum became a realization, there were many political events that occurred that slowed down the museum creation. Political events included debates based on the structure, location, and even other priorities such as a funding crisis. One of the co-chairman wanted to "personalize" the museum building. The museum's site, originally proposed to be located within the Alexander Hamilton U.S. Custom House, was relocated to Battery Park City in 1986. The funding crisis was when "Black Monday", which occurred on October 19, 1987, "wiped out" funds of potential donors for the museum as well as dropped real estate prices.

Initially, Koch's administration and co-chairmen George Klein were going to obtain the Custom House for the museum. In 1985 Governor Mario Cuomo’s broker negotiated site change to Battery Park City. Klein and other leaders were enthusiastic about the change since they wanted to create the best museum for the least price. Many plans for the Museum of Jewish Heritage was submitted but they were rejected by City's planning authorities.

In 1990, the museum merged with the Center for Holocaust Studies in Brooklyn. Architect Kevin Roche begin designing the museum in 1993. In the same year, Howard J. Rubinstein also joined the museum's board. 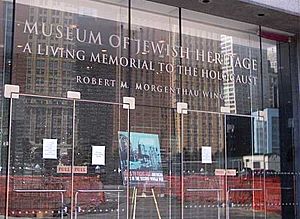 The plans were not completely accomplished in the beginning because the funds were not sufficient to cover the vision, so in the early 2000, the realization took place with the guidance of David Marwell. In 2003, the dedication of the Robert M. Morgenthau wing included auditoria, classrooms, conference center, and a temporary exhibition space.

At an event held at the Museum of Jewish Heritage on January 29, 2017, Elisha Wiesel suggested that protesting against Executive Order 13769 ("Protecting the Nation from Foreign Terrorist Entry into the United States") was part of his father Elie Wiesel's legacy. 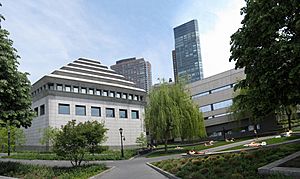 Outside view of the museum

From 1997 until 2019, the museum had a Core Exhibition which told the story of 20th and 21st century Jewish life from the perspective of those who lived it. Through a rotating collection that included artifacts, photographs, and documentary films, the Core Exhibition placed the Holocaust in the larger context of modern Jewish history. It was organized into three chronological sections: Jewish Life A Century Ago, The War Against the Jews, and Jewish Renewal — each told on a separate floor. It was housed in the museum's six-sided building, symbolic of the six points of the Star of David and the six million Jews who perished in the Holocaust.

On the morning of January 8, 2021, a Confederate flag was tied to the front door of the museum, less than two days after the 2021 storming of the United States Capitol by a pro-Donald Trump mob, some of whom carried Confederate flags into the Capitol building. The discovery of the flag prompted the filing of an aggravated harassment complaint.

The museum's collection contains more than 40,000 objects relating to Jewish history and the Holocaust. These objects are used in a variety of exhibitions and installations.

Auschwitz. Not long ago. Not far away

Ordinary Treasures: Highlights From The Museum Of Jewish Heritage Collection

This exhibition features drawings and everyday items, many of which were donated by the relatives of the original owners. The exhibition shows some aspects of daily life for European Jews under Nazi rule.

Andy Goldsworthy's living memorial garden, his first permanent commission in New York City, opened to the public on September 17, 2003. An eloquent garden plan of trees growing from stone, the garden was planted by the artist, Holocaust survivors, and their families. This contemplative space, meant to be revisited and experienced differently over time as the garden matures, is visible from almost every floor of the Museum.

Gerda III was a Danish rescue boat used in 1943 to save Jewish refugees by transporting then from Denmark to Sweden. The boat was donated to the Museum by the Danish Parliament in 1997 and is on long-term loan to Mystic Seaport. The vessel's history is captured in the book Henny and Her Boat: Righteousness and Resistance in Nazi-Occupied Denmark.

In the 375-seat Edmond J. Safra Hall, the museum offers a schedule of films, concerts, and panel discussions throughout the year. Past programs have included symposia on the Holocaust, interfaith dialogues, and concerts featuring established and emerging artists.

Over the last few years, the museum has held a day-long symposium on Darfur with policy makers and leaders on human rights; presented performers such as Idan Raichel and David Strathairn; hosted film screenings with actors and directors such as Kirk Douglas, John Turturro, Quentin Tarantino, Claude Lanzmann, and Ed Zwick; explored Justice after the Holocaust with experts like Alan Dershowitz; and hosted the revival of a Yiddish operetta, Die Goldene Kale.

This exhibition "features art made during and immediately after the Holocaust by those who lived it," including art made by prisoners in concentration camps and American liberators. The exhibit is intended to showcase the Holocaust as people saw it during the time.

In addition to the New York campus, the Museum has also operated the Auschwitz Jewish Center (AJC) in Oświęcim, Poland, since 2006.

Before the invasion of Poland and later occupation of Poland by Nazi Germany Oświęcim (renamed Auschwitz by the Nazis) was just an ordinary Polish town. The majority of its citizens were Jewish. Following the end of the World War II Auschwitz became the ultimate symbol of the Holocaust. In September 2000, the Auschwitz Jewish Center opened its doors to honor the former residents of the town and to teach future generations about what was lost. Located less than 2 miles (3.2 km) from Auschwitz-Birkenau, it is the only remaining Jewish presence in the town.

The AJC's mission is also to provide all visitors with an opportunity to memorialize victims of the Holocaust through the study of the life and culture of a formerly Jewish town and to offer educational programs that allow new generations to explore the meaning and contemporary implications of the Holocaust. The Center provides regularly scheduled exhibitions and educational programs. The United States Service Academy Program takes cadets and midshipmen to Poland for a three-week trip to learn from survivors, scholars, and historians. The Auschwitz Jewish Center Fellows program is a three-and-a-half-week study trip for students who are matriculated in graduate programs or are completing undergraduate degrees.

The National Yiddish Theatre Folksbiene is a professional theater company in New York City, founded in 1915, which produces both Yiddish plays and plays translated into Yiddish, in a theater equipped with simultaneous superscript translation into English. The theater company has been in residence at the Museum of Jewish Heritage since 2016.

All content from Kiddle encyclopedia articles (including the article images and facts) can be freely used under Attribution-ShareAlike license, unless stated otherwise. Cite this article:
Museum of Jewish Heritage Facts for Kids. Kiddle Encyclopedia.