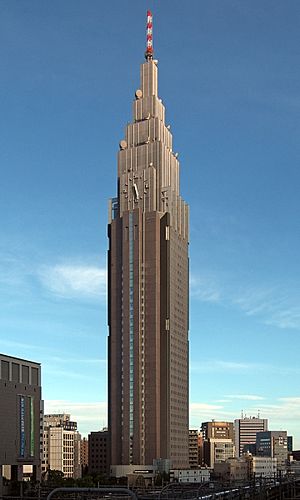 NTT Docomo Inc. is the predominant mobile phone operator in Japan. The name is officially an abbreviation of the phrase, "do communications over the mobile network", and is also from a compound word dokomo, meaning "everywhere" in Japanese. Docomo provides phone, video phone (FOMA and Some PHS), i-mode (internet), and mail (i-mode mail, Short Mail, and SMS) services. The company's headquarters are in the Sanno Park Tower, Nagatachō, Chiyoda, Tokyo.

Docomo had been spun off from Nippon Telegraph and Telephone (NTT) in August 1991 to take over the mobile cellular operations, although the parent company had the majority stake until the re-privatization in 2020. It provides 2G (mova) PDC cellular services, 3G (FOMA) W-CDMA, 4G LTE and 5G NR services. Its businesses also included PHS (Paldio), paging, and satellite. Docomo ceased offering a PHS service on January 7, 2008. In late 2020, Docomo was privatized by NTT for about $40 billion.

NTT Docomo is a subsidiary of Japan's incumbent telephone operator, NTT. The majority of NTT Docomo's shares are owned by NTT (which is 33.71% government-owned). While some NTT shares are publicly traded, control of the company by Japanese interests (government and civilian) is guaranteed by the number of shares available to buyers. It provides wireless voice and data communications to subscribers in Japan. NTT Docomo is the creator of W-CDMA technology as well as mobile i-mode service.

In addition to wholly owned subsidiaries in Europe and North America, the company is expanding its global reach through strategic alliances with mobile and multimedia service providers in Asia-Pacific and Europe. NTT Docomo is listed on the Tokyo (9437), London (NDCM), and New York (DCM) stock exchanges.

On April 19, 2008, it was announced that Ryuji Yamada, the current co-president of NTT Docomo, will be promoted as the president of NTT Docomo in June 2008. Masao Nakamura will stay in NTT Docomo as a director and also the senior adviser. Since October 2006, when the introduction to the service which allows the user to carry their original phone number with a new provider was made, NTT Docomo has lost many users to KDDI and SoftBank. This promotion was made in order to get more users for NTT Docomo. The company was the last major global mobile carrier to offer Apple's iPhone, which it finally did with the release of the iPhone 5s and 5c. This has been cited as one of the reasons for the steady stream of its customers switching for competing networks.

In June 2011, the company announced that they were teaming up with McAfee to provide McAfee VirusScan Mobile for its Android mobile users. In July 2012, NTT Docomo acquired Italy's Buongiorno in a deal worth 209 million euros.

In October 2007, the prototype Wellness mobile phone of Japan's NTT Docomo Inc. and Mitsubishi Electric Corp. was launched at CEATEC. It checks health with a motion sensor that detects body movement and measures calories, and includes a breathalyzer.

On January 24, 2008, NTT Docomo announced a partnership with Google, which allowed all models after the FOMA904i models to view YouTube videos.

In May 2017, NTT Docomo launched 5G trial networks at Aomi, Odaiba (Tokyo Waterfront City) and the area around Tokyo Skytree. NTT Docomo commercially launched its 5G network on March 25, 2020, the first Japanese operator to do so, and making Japan among the first countries in the world to launch 5G.

NTT Docomo was a founding member of the Symbian Foundation.

From 2008, Docomo began offering a service called the "Area Mail Disaster Information Service" which broadcasts Earthquake Early Warning messages produced by the Japan Meteorological Agency to its subscribers with compatible handsets. This service is provided free of charge and messages are limited to those areas affected by each particular alert. These alerts have a unique ring tone so they can be easily distinguished from incoming calls or messages. 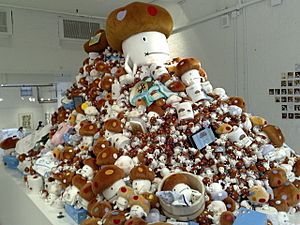 A large pile of Docomodake merchandise.

The company's mascot is Docomodake, a mushroom, which is quite a celebrity in Japan. He even is the hero of a Nintendo DS puzzle and platforming video game, Boing! Docomodake DS on 2007 and 2009; on 2016 or 2015, Nintendo put a Docomodake Mii in the app they called Miitomo, which was also released in North America, Japan and Europe. He also has a wide variety of merchandising such as cell phone straps, keychains, and plush dolls. As one type of advertising method, there are many types of Docomodakes such as mother and father, which symbolizes the plans that NTT Docomo offers.

Emoji, a pictographic language being adopted around the world was first created by NTT DoCoMo. The first emoji was created in 1998 or 1999 by Shigetaka Kurita, who was part of the team working on NTT DoCoMo's i-mode mobile Internet platform. The first set of 176 12×12 pixel emoji was created as part of i-mode's messaging features to help facilitate electronic communication, and to serve as a distinguishing feature from other services. 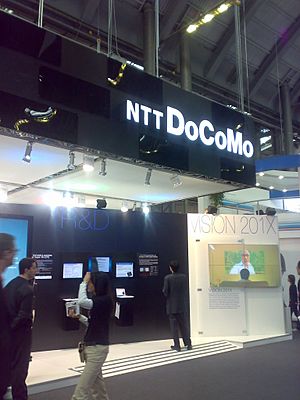 NTT Docomo has a wide range of foreign investments. However, NTT Docomo was not successful in investing in foreign carriers. Docomo had invested very large multibillion-dollar amounts in KPN, KT Freetel, AT&T Wireless, and had to write-off sell all these investments in foreign carriers. As a result, Docomo booked a total of about US$10 billion in losses, while during the same time Docomo's Japan operations were profitable.

In December 2007, NTT Docomo and KT Freetel jointly invested US$200 million for a total of 33% stake in U Mobile Malaysia.

In June 2008 NTT Docomo joined the non-profit Symbian Foundation led by Nokia to co-develop a new Symbian smartphone operating system based on the S60 platform, which resulted in Symbian^2 for the Japanese market.

In November 2008, NTT Docomo bought a 26% stake in Tata Teleservices for US$2.7 billion, the number 6 in Indian telecom industry and owned by the Tata group. India is the world's fastest-growing cellular market, adding as many as 9 million new customers a month. Tata Teleservices (which sells under the brand Tata Indicom and Virgin Mobile India) has 80 million subscribers as of October 2010. Though Tata Indicom is a CDMA based operator, they won GSM licenses as well, and the NTT Docomo-Tata venture is focused on GSM operation (called Tata Docomo). The Tata Docomo service was commercially launched in India in June 2009. Tata Docomo had about 32.82 million users at the end of June 2010. NTT Docomo was in litigation with Tata Sons over repatriation of money while selling the entire stake of tata teleservices back to tata sons.

In December 2006 they acquired Guamcell, the largest phone company in Guam, and changed its name to DOCOMO PACIFIC.

Docomo is working on implementing its FeliCa-based payment system, called iD, overseas. It has already launched the system in Guam, as well as Shanghai and Beijing, China (however, as of November 2010, it has withdrawn iD terminals from all merchants in China).

Working closely with NTT Docomo's business and R&D divisions, Docomo Capital is in charge of NTT Docomo's venture investments in mobile related start-up companies, mainly in the United States and has committed $100M in capital. It has invested in Cooliris, Couchbase, Evernote, Fab.com, HighlightCam, Swype, TuneWiki, and Sigfox.

Docomo Digital is the holding company for the operations of NTT Docomo.

All content from Kiddle encyclopedia articles (including the article images and facts) can be freely used under Attribution-ShareAlike license, unless stated otherwise. Cite this article:
NTT Docomo Facts for Kids. Kiddle Encyclopedia.