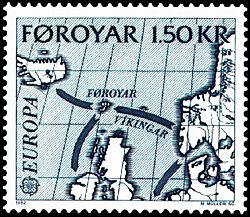 Naddodd (Old Norse: Naddoðr or Naddaðr, Icelandic: Naddoður, Faroese: Naddoddur) was a Norse Viking who is credited with the discovery of Iceland.

Naddodd was born in Agder in what is today southern Norway. He was one of the earliest settlers on the Faroe Islands after Grímur Kamban became the first to settle there around 825.

Landnámabók, a medieval Icelandic manuscript, describes in considerable detail the Settlement of Iceland (Icelandic: landnám) by the Norse in the 9th and 10th century. According to Landnámabók, Iceland was discovered by Naddodd, who was sailing from Norway to the Faroe Islands, but got lost and drifted to the east coast of Iceland. Naddodd came upon the shore of a land with a bay and mountains near what is today the Icelandic town of Reyðarfjörður.

Although he climbed a mountain to look for smoke rising from fireplaces he saw no sign of human activity. Naddodd decided to continue his journey to the Faroe Islands, but as he returned to his boat it started to snow and so he named the land Snowland (Snæland). The island was later known as Iceland (Ísland) following the settlement of Hrafna-Flóki Vilgerðarson.

Naddodd was the probable father of Ann Naddodsdóttir from Shetland. Naddodd has distant relations to Erik the Red and his son, Leif Erikson.

All content from Kiddle encyclopedia articles (including the article images and facts) can be freely used under Attribution-ShareAlike license, unless stated otherwise. Cite this article:
Naddodd Facts for Kids. Kiddle Encyclopedia.