Settlement of land in and around Nashville began with the acquisition of land from native populations under the 1809 Treaty of Fort Wayne. This was expanded with more acquisitions under the 1818 Treaty of St. Mary's. Founded in 1836 by county agent Banner C. Brummett, it was first named Jacksonburg. The population of the entire county was estimated to be 150 in 1830. The first Nashville courthouse was constructed in 1837 and a jail was added in the same year. By 1840, area population had grown to 2,364. The town was officially incorporated in 1872. By the turn of the century, heavy logging in the area had caused significant deforestation which resulted in dramatic erosion problems. 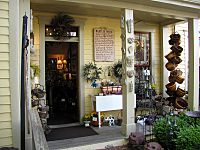 Entrance to a shop in the Bartley House

The Brown County Courthouse Historic District and F.P. Taggart Store are listed on the National Register of Historic Places.

Today, Nashville boasts a tourist industry based upon the original works of resident artists and upon the area's natural beauty. Brown County State Park is nearby. Art, antique, and specialty shops, as well as galleries, restaurants, and entertainment venues, make up downtown Nashville, and many inns, rented cottages, and bed and breakfast establishments serve visitors. 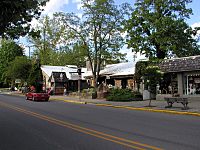 Nashville's rolling hills, ridges, and valleys are a story of the north fork of Salt Creek. The surrounding hills are made of sandstone, siltstone and shale. These sedimentary rocks were laid down in an ancient river delta named the Borden delta, similar to the current Mississippi River delta. Salt Creek (south), Greasy Creek (east), and Jackson Branch Creek (west) have cut down through the surrounding terrain to give Nashville its rolling hills. Lake Monroe, the largest lake in Indiana, was constructed by damming Salt Creek south of Bloomington.

The climate in this area is characterized by hot, humid summers and generally mild to cool winters. According to the Köppen Climate Classification system, Nashville has a humid subtropical climate, abbreviated "Cfa" on climate maps.

There were 359 households, of which 15.9% had children under the age of 18 living with them, 37.3% were married couples living together, 7.0% had a female householder with no husband present, 2.2% had a male householder with no wife present, and 53.5% were non-families. 48.5% of all households were made up of individuals, and 29% had someone living alone who was 65 years of age or older. The average household size was 1.90 and the average family size was 2.79.

All content from Kiddle encyclopedia articles (including the article images and facts) can be freely used under Attribution-ShareAlike license, unless stated otherwise. Cite this article:
Nashville, Indiana Facts for Kids. Kiddle Encyclopedia.