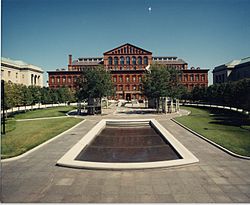 The National Building Museum is a museum in Washington D.C. dedicated to architecture, landscaping, urban design, urban planning, industrial design, and the history of buildings in the United States. The museum host exhibitions of architectural styles and organizes tours for visitors and activities for children and families. The museum was established in 1969 by architect Beverly Willis and moved to an old building that was the Interior of the Pension Office in 1980.

All content from Kiddle encyclopedia articles (including the article images and facts) can be freely used under Attribution-ShareAlike license, unless stated otherwise. Cite this article:
National Building Museum Facts for Kids. Kiddle Encyclopedia.