The National Museum of Mathematics or MoMath is a museum dedicated to mathematics in Manhattan, New York City. It opened on December 15, 2012. It is located at 11 East 26th Street between Fifth and Madison Avenues, across from Madison Square Park in the NoMad neighborhood. It is the only museum dedicated to mathematics in North America, and features over thirty interactive exhibits. The mission of the museum is to "enhance public understanding and perception of mathematics". The museum is known for a special tricycle with square wheels, which operates smoothly on a catenary surface.

In 2006 the Goudreau Museum on Long Island, at the time the only museum in the United States dedicated to mathematics, closed its doors. In response, a group led by founder and former CEO Glen Whitney met to explore the opening of a new museum. They received a charter from the New York State Department of Education in 2009, and raised over 22 million dollars in under four years.

With this funding, a 19,000 square feet (1,800 m2) space was leased in the Goddard Building at 11-13 East 26th Street, located in the Madison Square North Historic District. Despite some opposition to the architectural plans within the local community, permission for construction was granted by the New York City Landmarks Preservation Commission and the Department of Buildings. 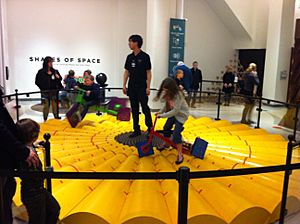 In October 2016, the exhibit The Insides of Things: The Art of Miguel Berrocal was opened, displaying a collection of puzzle sculptures by Spanish artist Miguel Ortiz Berrocal (1933-2006), donated by the late Samuel Sensiper. Each sculpture can be disassembled into small interlocking pieces, eventually revealing a small piece of jewelry or other surprise.

On August 2, 2018 MoMath announced the creation of a Distinguished Chair for the Public Dissemination of Mathematics. Princeton professor and Fields Medal winner Manjul Bhargava was named as the first recipient of this position.

All content from Kiddle encyclopedia articles (including the article images and facts) can be freely used under Attribution-ShareAlike license, unless stated otherwise. Cite this article:
National Museum of Mathematics Facts for Kids. Kiddle Encyclopedia.