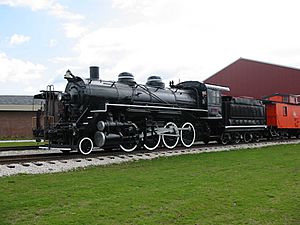 US Army No. 101, a Consolidation Class 2-8-0, on display at the National Railroad Museum on April 26, 2004. This locomotive was built for use in France during WWI but never made it there. The original European style cab was replaced by an American style one. 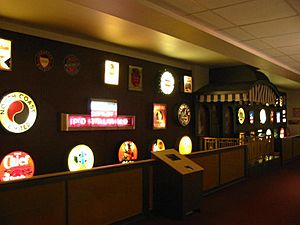 The Bauer Drumhead Collection. These drumheads were saved from scrapped locomotives and other railroading equipment.

Founded in 1956, by community volunteers in Green Bay, the National Railroad Museum is one of the oldest institutions in the United States dedicated to preserving and interpreting the nation's railroad history. Throughout its history, patron contributions have continued to create one of the largest railroad preservation institutions in the United States.

The National Railroad Museum has a large collection of rolling stock that spans more than a century of railroading and a number of historic locomotives, including an Aerotrain, Union Pacific Big Boy No. 4017 (One of the world's largest steam locomotive types), and British Railways Class A4 No. 60008 Dwight D Eisenhower (ex-London & North Eastern Railway No. 4496 Golden Shuttle) and train used by the Supreme Allied Commander and his staff in the United Kingdom and continental Europe during World War II.

In addition to the rolling stock, there is a museum building housing a wide variety of railroad artifacts, an archive, and photography gallery. There is also a standard gauge track around the perimeter of the grounds. There is also an 80-foot (24 m) high wooden observation tower with views of the Fox River and Green Bay. The museum hosts an annual Day Out with Thomas event, where Thomas the Tank Engine pulls young friends past the exhibited rolling stock.

In October of every year in preparation for Halloween, the grounds of the museum are the site of the Green Bay Preble Optimist Club's haunted attraction, "Terror on the Fox", which uses the trains for "haunted" rides through the grounds after dark, along with other attractions. 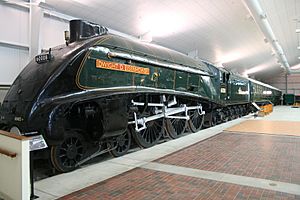 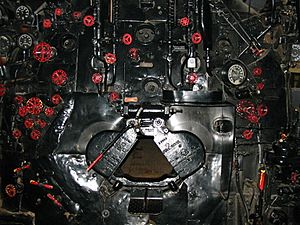 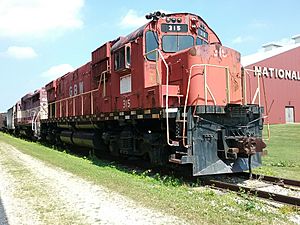 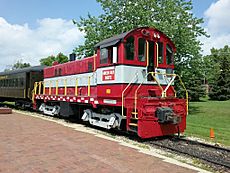 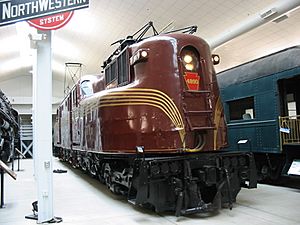 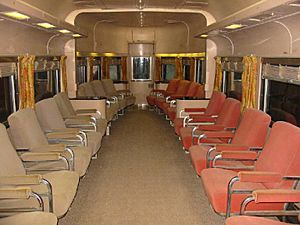 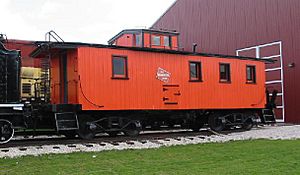 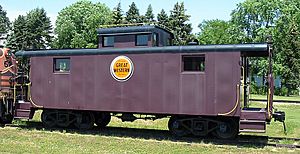 The library collection represents a variety of topics surrounding the social, economic, political, and cultural aspects of U.S. railroading history.

The photograph collection includes 15,000 photographic prints, slides, and film negatives representing railroading in the United States geographically from 1890 through the present day.

The museum is planning to construct a roundhouse that will surround the current buildings on the property (except the train station). This will provide protection from the weather for the locomotives and cars displayed in the open pavilion. The museum plans to invest in a 2-3 year fundraising effort to raise the money needed to construct the roundhouse.

All content from Kiddle encyclopedia articles (including the article images and facts) can be freely used under Attribution-ShareAlike license, unless stated otherwise. Cite this article:
National Railroad Museum Facts for Kids. Kiddle Encyclopedia.