National Velvet is a 1944 American Technicolor sports film directed by Clarence Brown and based on the 1935 novel of the same name by Enid Bagnold. It stars Mickey Rooney, Donald Crisp, and a young Elizabeth Taylor. In 2003, National Velvet was selected for preservation in the United States National Film Registry by the Library of Congress as being "culturally, historically, or aesthetically significant." 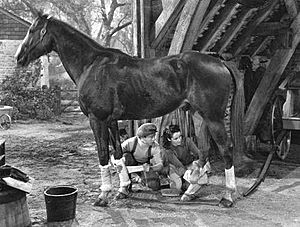 Mickey Rooney, Elizabeth Taylor and The Pie in National Velvet 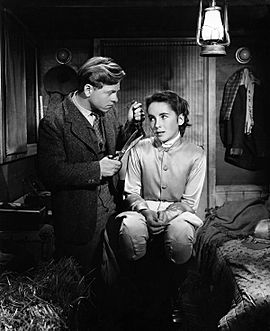 National Velvet is the story of a 12-year-old, horse-crazy girl, Velvet Brown, who lives in the small town of Sewels in Sussex, England. She wins a spirited gelding in a raffle and decides to train him for the Grand National steeplechase. Velvet is aided by a penniless young drifter named Mi Taylor, who discovered Mrs. Brown's name and address among his late father's effects, though he is unaware of why it was there. Hoping to profit from the association, Mi accepts an invitation to dinner and a night's lodging at the Browns' home, but Mrs. Brown is unwilling to allow Mi to trade on his father's good name and remains vague about their connection. Nevertheless, she convinces her husband to hire Mi over his better judgment, and Mi is brought into the home as a hired hand. It is revealed that Mi's career as a jockey ended in a collision which resulted in another jockey's death. Mi has not held a job since, and now hates horses.

Velvet names the horse she won "The Pie" because his previous owner, Mr. Ede, called the troublesome gelding a pirate (actually it was Pie as the horse was The Piebald). Seeing Pie's natural talent, Velvet pleads with Mi to train him for the Grand National. Mi believes it a fool's errand, not because the horse lacks ability, but because they have no way to finance the effort. He makes his case to Mrs. Brown, but she consents to Velvet's desire to train the horse. To cover the entrance fee and other costs, Mrs. Brown gives Velvet her prize money for swimming the English Channel. Velvet and Mi train the horse and enter him into the race.

Mi and Velvet travel to the Grand National. Mi hires a professional jockey, but the night before the race, Velvet senses he lacks faith in the Pie and will lose. Velvet dismisses the jockey, leaving them without a rider. That night, Mi overcomes his fear of riding and intends to race Pie himself. He discovers that Velvet has donned the jockey silks and intends to ride. Knowing the dangers, Mi attempts to dissuade Velvet, who is determined to ride. As the race unfolds, Velvet and Pie clear all hurdles and win the race. Elated but exhausted, Velvet falls off her mount at the finish. After the track doctor discovers that Velvet is a girl, Velvet and Pie are disqualified. Velvet, who expected to be disqualified, only wanted to prove that Pie is a champion. Velvet becomes a media sensation and is offered large amounts of money to travel to Hollywood and be filmed with Pie. To her father's disappointment, Velvet tearfully refuses the offers, claiming that Pie would dislike being stared at. Velvet says that she raced Pie at the Grand National because he deserved a chance for greatness. Velvet chooses a normal life for her and her horse. At the close of the film, Mi, ready to resume his old life, takes his leave without bidding Velvet goodbye. Before he gets too far, Mrs. Brown gives Velvet permission to reveal her relationship with his father. Velvet gallops off on Pie and finds Mi on the road. She tells him that his father was Mrs. Brown's coach as the first woman to swim the English Channel.

In 1978, a sequel, International Velvet, was released. The film stars Tatum O'Neal, Christopher Plummer, Anthony Hopkins, and Nanette Newman, who plays Velvet Brown as an adult. After the events of "National Velvet" Donald got married, had a daughter named Sarah Velvet Brown, and moved from England to Cave Creek, Arizona. Sarah comes to live with Velvet and her boyfriend John after Donald and his wife die from their injuries in a car accident. Elizabeth Taylor did not reprise her role as Velvet in the sequel.

All content from Kiddle encyclopedia articles (including the article images and facts) can be freely used under Attribution-ShareAlike license, unless stated otherwise. Cite this article:
National Velvet (film) Facts for Kids. Kiddle Encyclopedia.