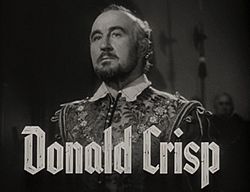 Donald Crisp (born George William Crisp, 27 July 1882 – 25 May 1974) was an English-born American actor, director, producer and screenwriter. He began his career as a silent movie actor. He won an Academy Award for Best Supporting Actor in 1942 for his role in How Green Was My Valley.

Crisp was born in London, England. He studied at the University of Oxford. Crisp died in Los Angeles, California from a stroke at the age of 91.

All content from Kiddle encyclopedia articles (including the article images and facts) can be freely used under Attribution-ShareAlike license, unless stated otherwise. Cite this article:
Donald Crisp Facts for Kids. Kiddle Encyclopedia.