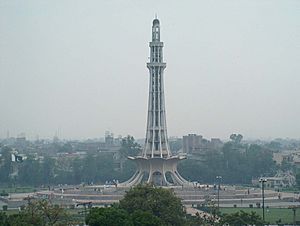 Pakistan has several official national symbols including a historic document, a flag, an emblem, an anthem, a memorial tower as well as several national heroes. The symbols were adopted at various stages in the existence of Pakistan and there are various rules and regulations governing their definition or use. The oldest symbol is the Lahore Resolution, adopted by the All India Muslim League on 23 March 1940, and which presented the formal demand for greater autonomy for Muslims in united India, and later led to the demand for a separate and independent 'Pakistan'. The Minar-e-Pakistan memorial tower which was built in 1968 on the site where the Lahore Resolution was passed. The national flag was adopted just before independence was achieved on 14 August 1947. The national anthem and the state emblem were each adopted in 1954. There are also several other symbols including the national animal, bird, flower and tree.

All content from Kiddle encyclopedia articles (including the article images and facts) can be freely used under Attribution-ShareAlike license, unless stated otherwise. Cite this article:
National symbols of Pakistan Facts for Kids. Kiddle Encyclopedia.