The Naval Museum of Halifax (formerly Admiralty House and Maritime Command Museum) is a Canadian Forces museum located at CFB Halifax in the former official residence of the Commander-in-Chief of the North America Station (1819–1905). Also known as the "Admiralty House", the residence is a National Historic Site of Canada located in Halifax, Nova Scotia, Canada. The museum collects, preserves and displays the artifacts and history of the Royal Canadian Navy. 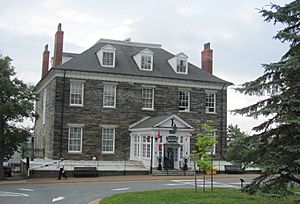 Admiralty House served as the official residence of the admiral commanding the North American Station of the British Royal Navy from 1819 to 1905. Construction of the large Palladian Style Georgian house overlooking the Halifax Naval Yard began in 1814. Squadron commanders previously resided aboard a flagship moored at the Naval Yard. The house was completed in 1819. It became the summer residence of the admiral of the North American Squadron when the squadron shifted its main base to Bermuda in 1818. The first to live in the residence was Admiral David Milne. 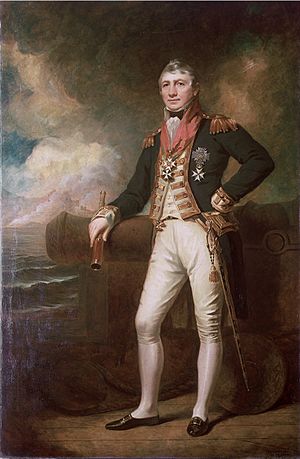 As the residence of one of the most important officials in Halifax, Admiralty House hosted many social and ceremonial events in the 19th century. One of the largest was a ball for 600 guests hosted by Admiral Thomas Cochrane, Earl of Dundonald in 1848. Another famous resident of the house was Admiral Francis Austen, brother of the famous novelist Jane Austen. In all, 36 admirals lived in the house, the last being Sir Day Hort Bosanquet.

Admiralty House was taken over by the Canadian government in 1905 as Canada took responsibility for the Halifax Dockyard from the British Royal Navy. In World War I it served as a naval hospital. The roof was blown in by the Halifax Explosion on December 6, 1917. Despite the damage, hospital staff, many of them injured themselves, treated many wounded in the house in the hours after the explosion. After repairs, the house was used as a clinic by the Massachusetts Halifax Relief Commission to assist survivors after the explosion. From 1925 to 1954 it became part of the Royal Canadian Navy base HMCS Stadacona, serving as a Wardroom Officer's Mess and later as office space. In 1961 it became the library for the Royal Canadian Navy and provided classroom space.

Two Admirals distinguished themselves during the War of 1812:

Four of the Admirals fought in the renown Siege of Sevastopol (1854–55) during the Crimean War:

Two Admirals were involved in the search for Franklin's Lost Expedition: 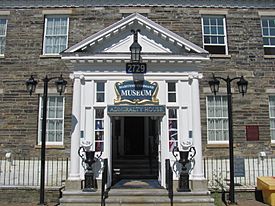 Entrance to the Museum

Admiralty House was officially opened as a museum on March 26, 1974, by Rear Admiral D. S. Boyle. The house was declared a National Historic Site in 1978. The museum underwent extensive renovations in 2009–2010. 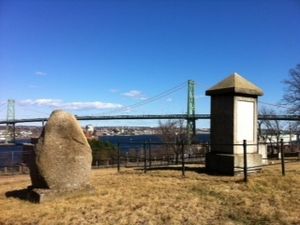 The Royal Navy Burying Ground at Halifax has monuments to those served and lost in the medical facility as a result of the capture of USS Chesapeake by HMS Shannon. There are 84 grave markers, but as many as 500 people buried there. There was a tradition where the Commander and Chief of the North America and West Indies Station who lived in Admiralty House created a grave marker for their crew who died while at the station. 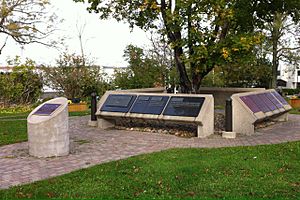 On the grounds of the Admiralty House is the Admiralty Garden which was created c. 1814 and has plaques and monuments displayed to honour Admirals and other military personnel. In 1972 the "Wall of Valour" was created to recognize the bravery decorations awarded to members of the Canadian Navy and the Naval Reserves. Those that are listen received: Cross of Valour (Canada); Star of Courage (Canada); and the Medal of Bravery (Canada). There are also plaques of Historic Sites and Monuments Board of Canada to commemorate the following Admirals:

The museum is part of a system of 55 museums run by the Canadian Department of National Defence. It is the largest naval museum within the system. The museum is also affiliated with the Canadian Heritage Information Network (CHIN) and works jointly with Nova Scotia's Maritime Museum of the Atlantic to present the naval history of the region.

All content from Kiddle encyclopedia articles (including the article images and facts) can be freely used under Attribution-ShareAlike license, unless stated otherwise. Cite this article:
Naval Museum of Halifax Facts for Kids. Kiddle Encyclopedia.