Nervilia crociformis, commonly known as the trembling nervilia or round shield orchid, is a small terrestrial orchid found in South and Southeast Asia and in New Guinea and northern Australia. It has a single short-lived green flower with a white labellum. A more or less circular leaf held horizontally above the ground emerges at the base of the flowering stem after flowering. 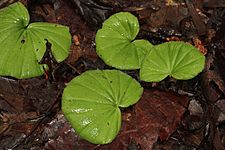 Nervilia crociformis is a terrestrial, perennial, deciduous, sympodial herb which grows in clonal colonies with only a few individuals producing flowers in any one year. A single green flower 25–30 mm (0.98–1.2 in) long and 30–35 mm (1.2–1.4 in) wide is borne on a flowering stem 40–80 mm (2–3 in) tall. The sepals are 16–19 mm (0.6–0.7 in) long and about 2 mm (0.08 in) wide while the petals are similar but slightly shorter. The labellum is white, 15–18 mm (0.6–0.7 in) long with a wide fringe and small, hairy calli. The flower only lasts for two or three days, following which a single leaf develops, including on those plants that did not flower. The leaf is dark green, more or less circular, 40–70 mm (2–3 in) in diameter with about ten radiating veins. Flowering occurs between November and December in Australia and from May to June in India.

All content from Kiddle encyclopedia articles (including the article images and facts) can be freely used under Attribution-ShareAlike license, unless stated otherwise. Cite this article:
Nervilia crociformis Facts for Kids. Kiddle Encyclopedia.