This line runs north-south to Hoboken Terminal with connections via the Secaucus Junction transfer station to New Jersey Transit one-stop service to New York Penn Station and to other NJ Transit rail service. Connections are available at the Hoboken Terminal to other New Jersey Transit rail lines, the PATH train at the Hoboken PATH station, New York Waterways ferry service to the World Financial Center and other destinations and Hudson-Bergen Light Rail service. 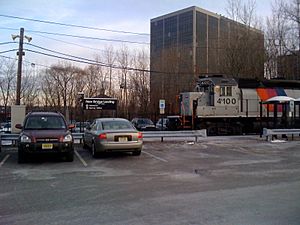 Free parking is available near the station on certain days and times on several local roads.

Prices are as follows:

A total of 42 daily parking spaces are available at the New Bridge Landing Train Station parking lot and are located on the perimeter of the lot at a cost of $4.00 per day as of 2008. (there are parking regulations, however).These spaces are available on a first-come, first-served basis, are limited and tend to fill up quickly.

Due to increased ridership from bi-directional operation, an additional 143 parking spaces were added to a permit only parking lot on August 13, 2008, bringing the total number of spaces to 291.

All content from Kiddle encyclopedia articles (including the article images and facts) can be freely used under Attribution-ShareAlike license, unless stated otherwise. Cite this article:
New Bridge Landing station Facts for Kids. Kiddle Encyclopedia.