New Plymouth was a colony town, bought and planned before it was settled. It was the combined project of a group of people purportedly dissatisfied with city life in Chicago, who in 1895 formed what they called "The Plymouth Society of Chicago" and William E. Smythe, who was the chairman of the executive committee of the National Irrigation Congress and a famous irrigation promoter. Mr. Smythe was determined to found a colony to serve as a striking argument in favor of his project - irrigation. He spoke throughout the east, urging young and old men to go west in colonies and develop the country with the help of irrigation. He wanted the first colony to be called New Plymouth — after Plymouth, Massachusetts — and wanted it located in southwestern Idaho in the Payette Valley, which he had found apt for his purpose because of the extraordinary water supply via the nearby Payette River.

The Plymouth Society of Chicago selected a committee to investigate the irrigated Payette River Valley in the five-year-old state of Idaho, and another site in Colorado, to be purchased for the colony. The present city of New Plymouth was on the drawing boards in Chicago, designed as a town able to be self-reliant through the use of irrigation, solidly built on an agricultural and railroad economy.

In February 1896, each colonist purchased 20 shares of stock at $30 per share, which entitled him to 20 acres (81,000 m2) of land and a town lot. He was to clear the land of sagebrush and plant fruit trees, preferably apples. The town was platted with a horseshoe shape with its open end facing to the north, toward the railroad and the river. This area was planned as an industrial zone, and the acre tracts around the horseshoe were the residential lots.

The homes were to be built on the street side and the balance of the acre for garden and pasture for the family cow and the driving team. Two streets, separated by an 80-foot (24 m) park, curve around the town in a horseshoe shape. This mile-long (1.6 km) park and the streets that enclose it were called "The Boulevard." The park was planted with grass and shade trees. Plymouth Avenue, the main street and principal business thoroughfare, was surveyed (16 feet off the section line) down the center of the horseshoe from the railroad on the north through the Boulevard on the south.

The community was at first called the New Plymouth Farm Village and was governed by a colony board of directors until it incorporated as a village in 1908, dropping the last two words in the name. 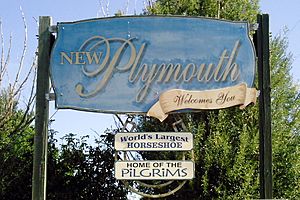 Sign that welcomes you into New Plymouth coming from the south.

According to the United States Census Bureau, the city has a total area of 0.69 square miles (1.79 km2), all of it land.

There were 565 households of which 37.5% had children under the age of 18 living with them, 54.7% were married couples living together, 11.5% had a female householder with no husband present, 5.5% had a male householder with no wife present, and 28.3% were non-families. 23.5% of all households were made up of individuals and 11.8% had someone living alone who was 65 years of age or older. The average household size was 2.72 and the average family size was 3.23.

There were 524 households out of which 38.0% had children under the age of 18 living with them, 56.1% were married couples living together, 10.7% had a female householder with no husband present, and 29.0% were non-families. 25.6% of all households were made up of individuals and 13.7% had someone living alone who was 65 years of age or older. The average household size was 2.67 and the average family size was 3.23.

The Boulevard is the main residential area and the original setting of the town. There are many unique things about the boulevard. First, it is in the shape of a horseshoe with a large park down the middle. Also, a system of ditches parallel the roads and drain into the canal, giving each landowner who pays for a share access to irrigation water. This comes from the days when farming was intended to be done inside the city. It is now used for gardening or watering the lawn. It also now includes a frisbee golf course along the west side.

All content from Kiddle encyclopedia articles (including the article images and facts) can be freely used under Attribution-ShareAlike license, unless stated otherwise. Cite this article:
New Plymouth, Idaho Facts for Kids. Kiddle Encyclopedia.