John Wesley's New Room formally known as New Room is a historic building in Broadmead, Bristol, England. As the oldest purpose-built Methodist meeting house, it has been designated by Historic England as a grade I listed building, and is the only piece of land in Broadmead for which the freehold has not been bought by Bristol City Council during expansion after World War II.

The courtyards around the building contain statues of John Wesley and his brother Charles.

It was built in 1739 under the direction of John Wesley—he called it "our New Room in the Horsefair"—making it the oldest Methodist chapel in the world. Above the chapel are the rooms in which Wesley and other preachers stayed. The chapel includes a double-decker pulpit, which was common at the time, and an octagonal lantern window to reduce the amount paid in Window tax. In addition to meetings and worship, the New Room was used as a dispensary and schoolroom for the poor people of the area. The pews and benches were made from old ship timber. The Baldwin and Nicholas Street Methodist groups combined to form the United Society, which met at the New Room from 3 June 1739. Wesley insisted that meetings at the New Room should only be held outside of Anglican church hours as he wanted Methodism to complement rather than compete with Anglican worship. 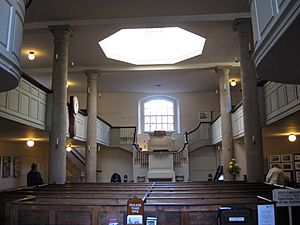 In 1748 it was extended, possibly by the Quaker architect George Tully because of the stylistic similarities with the Friends' Meeting House at Quakers Friars of the same period. John Wesley believed that liturgical worship should be carried out in churches, and only reluctantly allowed the enlarged New Room to comply with the Toleration Act of 1689 making it a formal place of worship. Wesley lived at the New Room from 1748 to 1771 and administered Holy Communion there when his brother Charles Wesley was away. Wesley added to the Methodist offer in Bristol by selling his published works from a bookstore in the New Room. Analysis of the complete printed output of Bristol between 1695 and 1775 shows that over half was written by Methodists.

After Wesley's death the property passed into the hands of the Welsh Calvinistic Methodists. In 1929, it was given back to the Wesleyan Methodist Church. The John Snetzler Chamber Organ of 1761 is a 20th-century addition following the restoration of the building in 1929 by Sir George Oatley.

A garden in the Broadmead Courtyard was opened on 24 May 2011 by the Lord Mayor of Bristol. This was followed by the opening of the Horsefair Visitor Centre on 13 July 2017 by the Duke of Gloucester. The new facilities include a cafe, library and archive and conference and education facilities plus an expanded museum in the preachers' rooms above the chapel.

All content from Kiddle encyclopedia articles (including the article images and facts) can be freely used under Attribution-ShareAlike license, unless stated otherwise. Cite this article:
New Room, Bristol Facts for Kids. Kiddle Encyclopedia.