The museum, which grew from a gallery housed at the New York City Police Academy, opened at 26 Broadway at Bowling Green in January 2000 and re-opened in a new location at 100 Old Slip, former home of the First Precinct, in January 2002. In October 2012, Hurricane Sandy caused substantial damage at 100 Old Slip, and the museum reopened on October 24, 2013 at 45 Wall Street. That location closed in 2014 and the museum's future plans are unclear. While there were attempts to move the museum to Pershing Hall, a historic building on Governors Island, to date the museum has only sponsored a few exhibits on the island that is open to the public from May to September.

It also allows visitors to simulate a police firefight, and judges whether or not the shooting was correct, allowing civilians to have some understanding of situations that police face and provide them with a better understanding of the work of police officers than that provided by the media. Its exhibits are not without controversy, and city historians have accused the museum of omitting coverage of more controversial aspects of NYPD history. 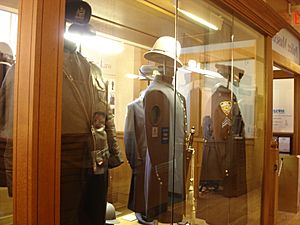 Police uniforms on display in the museum

On February 16, 1998, plans for a police museum were unveiled when then-Police Commissioner Howard Safir and the Alliance for Downtown New York (the local Business improvement district) made $5 million available for the museum in return for a new police substation in Lower Manhattan. Funding for the museum was criticized and classified by some as the buying of police protection for a given area at the expense of another that could not afford to broker a similar deal. As a result, Mayor Rudy Giuliani cancelled the funding for the museum two days later. In March of the same year, the New York City Police Museum non-profit corporation was created, and in April 1999, the museum opened, although the official unveiling was not held until January 19, 2000.

As of its January 2000 opening, the museum was privately run with support from the city, including more than ten years of free rent and staffing by police officers. Private donors provided more than $2 million for the construction of the museum, while the city contributed $1 million. The museum has been criticized by some who believe it glosses over some of the low moments of the department in its quest to show the good work of the Department.

The new museum replaced a small gallery that had been housed in the police academy on East 20th Street. Among the exhibits brought to the new museum are: a display of the evolution of police uniforms since their inception in 1853, a gun used by Al Capone's gang in the 1928 murder of Frankie Yale, the first machine gun used in a gangland killing in New York, and a gift from Italy to the City of New York following the assassination of Lieutenant Joseph Petrosino in Sicily in 1909, the only member of NYPD to be killed in the line of duty on foreign soil. Other exhibits include a green and white radio car, antique firearms and a wooden desk from the 46th Precinct in Morris Heights, The Bronx. 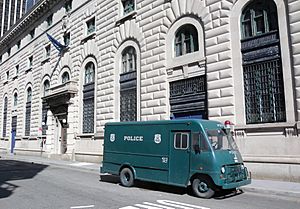 Patrol Wagon on display outside

In January 2002, the museum re-opened in a new location on Old Slip, closer to South Street Seaport. The new premises, appropriately, were the old First Precinct Building, designed by the partnership of Richard Howland Hunt and Joseph Howland Hunt and built in 1909-11. The landmarked building was a model precinct house in its time. From 1884 to 1973 this Florentine Renaissance palazzo with its bold rusticated facades was the home of the First Precinct, which one historian called "the most important police precinct in the world." That precinct closed due to a corruption scandal in 1977, and museum officials saw a move to this location as an opportunity to connect with the department's history. Construction and renovation of the new space cost more than $4 million and exhibition space grew by nearly 45% 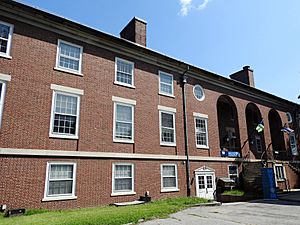 Its new exhibits included a 1972 Plymouth Fury, a model of a jail cell, a timeline of transportation, lock-picking tools belonging to Willie Sutton, an extensive exhibit on September 11 that occupies the museum's third floor, and a Hall of Heroes that includes the name and badge of every NYPD officer killed in the line of duty, starting with David Martin on August 6, 1861. Although the new museum was significantly larger, it is still not comprehensive. The exhibit that the museum assembled for the first anniversary of the September 11 attacks allowed visitors to gain an immediate impression of the physical damage caused by the attacks and the debris that fell around Ground Zero.

All content from Kiddle encyclopedia articles (including the article images and facts) can be freely used under Attribution-ShareAlike license, unless stated otherwise. Cite this article:
New York City Police Museum Facts for Kids. Kiddle Encyclopedia.