The New Zealand foreshore and seabed controversy is a debate in the politics of New Zealand. It concerns the ownership of the country's foreshore and seabed, with many Māori groups claiming that Māori have a rightful claim to title. These claims are based around historical possession and the Treaty of Waitangi. On 18 November 2004, the New Zealand Parliament passed a law which deems the title to be held by the Crown. This law, the Foreshore and Seabed Act 2004, was enacted on 24 November 2004. Some sections of the Act came into force on 17 January 2005. It was repealed and replaced by the Marine and Coastal Area (Takutai Moana) Act 2011.

In 1997, an application was made to the Māori Land Court requesting, amongst other matters, that "the foreshore and seabed of the Marlborough Sounds, extending the limits of New Zealand's territorial sea" be defined as Māori customary land under the Te Ture Whenua Māori Act 1993. The Māori Land Court determined that it could consider the issue, but was overruled by the High Court. On 19 June 2003, New Zealand's Court of Appeal ruled in Ngati Apa v Attorney-General, amongst other matters, that:

In Re the Ninety-Mile Beach

See also: In Re the Ninety-Mile Beach

The Court of Appeal overturned a line of precedent dating back to the 1877 decision in Wi Parata v Bishop of Wellington, and affirmed by the New Zealand Court of Appeal in the 1963 Ninety Mile Beach decision. These early decisions held that because of circumstances unique to New Zealand, Māori land ties were so weak that they could be extinguished through such indirect routes as unrelated phrases in legislation or through the Native (now Māori) Land Court’s investigation of dry land adjoining the foreshore.

In its ruling, the Court of Appeal found that "native property rights are not to be extinguished by a side wind.... The need for 'clear and plain' extinguishment is well established and is not met in this case. In the Ninety-Mile Beach case, the Court did not recognise that principle of interpretation". The ruling was foreshadowed by academic work during the late 1980s and 1990s, which argued that the Ninety Mile Beach case was wrongly decided.

The hikoi on Cambridge Terrace, heading to Parliament.

Although under attack from both sides, the government chose to press forward with its legislation, asserting that what it called its "middle way" was the only means of satisfactorily resolving the controversy. Criticism of the government, both from Māori and from opposition parties, continued to intensify, and the government began to lose ground in opinion polls.

On January the 27th 2004, National Party leader Don Brash delivered a speech at Orewa that was highly critical of the government's policy towards Māori. Brash said that the government was showing strong favouritism to Māori, both in the foreshore and seabed debate and in many other areas of government policy. Brash's speech was condemned both by the government and by many Māori groups, but met with widespread approval from many other sectors of New Zealand society. Shortly afterwards, an opinion poll put the National Party ahead of the Labour Party for the first time in over 18 months.

The government was also facing serious internal debate over its proposed legislation. Many of the party's Māori MPs were deeply unhappy with the government's plans, and raised the possibility of breaking ranks to oppose the legislation in Parliament. This left the government unsure of whether it had a sufficient number of votes to pass its legislation through Parliament. In theory, the government had a narrow majority willing to support its proposed bill, with Labour, the Progressives, and United Future all prepared to vote in favour. If two of Labour's Māori MPs were to vote against the bill, however, it would fail. Moreover, any attempt to make the bill more favourable to these MPs would risk losing the support of United Future.

One of the strongest critics of the bill within the Labour Party was Tariana Turia, a junior minister. Turia indicated on a number of occasions that she might vote against the government's bill, but for a considerable time refused to give a final decision. It was made clear that voting against a government bill was "incompatible" with serving as a minister, and that doing so would result in Turia's dismissal from that role. Turia was encouraged to either abstain or simply be absent when the vote was taken. On 30 April, however, Turia announced that she would vote against the legislation, and would resign (effective 17 May 2004) from the Labour Party to contest a by-election in her electorate. She was dismissed from her ministerial post by the Prime Minister the same day. Another Labour MP, Nanaia Mahuta, eventually decided that she would also vote against the bill, but chose not to leave the Labour Party. Mahuta had no ministerial post to be dismissed from. 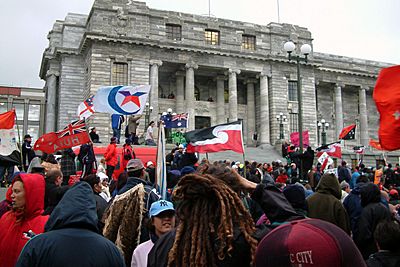 The hikoi at the New Zealand Parliament.

On 5 May 2004, a hikoi (a long walk or march — in this case, a protest march) arrived in Wellington. It had begun in Northland thirteen days earlier, picking up supporters as they drove to the capital. The hikoi, which some estimated to contain fifteen thousand people by the time it reached Parliament, strongly opposed the government's plans, and was highly supportive of Tariana Turia's decision.

Turia and her allies, believing that the time was right for an independent Māori political vehicle, established a new Māori Party. Many of Turia's supporters, such as Mana Motuhake leader Willie Jackson and Māori academic Pita Sharples, claimed that Māori who formerly supported Labour would flock to the new party en masse. On the other hand, other commentators pointed to a poor track record for Māori parties in the past, and said that it would be difficult to unite diverse Māori opinion into a single group.

On 18 November 2004, Tim Selwyn put an axe through a window of the electorate office of Helen Clark, an act he described as a protest against Helen Clark's handling of the issue.

All content from Kiddle encyclopedia articles (including the article images and facts) can be freely used under Attribution-ShareAlike license, unless stated otherwise. Cite this article:
New Zealand foreshore and seabed controversy Facts for Kids. Kiddle Encyclopedia.