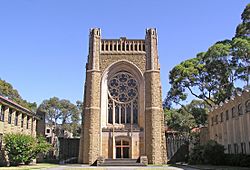 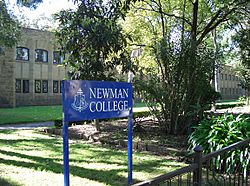 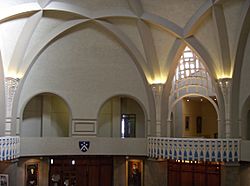 Interior of the dining room

The collegiate system was a response to the secular nature of the university, as each of the major Christian churches were given land to the north of the main campus to establish institutions in which to teach religion. The college motto is Luceat Lux Vestra, translating from Latin as "Let Your Light Shine".

All undergraduate members of Newman College are accepted into the Newman College Students' Club (NCSC), a self-governing incorporated organisation which runs day-to-day and special events in the college. An executive committee (the general committee) is elected annually. The president, treasurer and functions representative are elected directly to their positions. The president then allocates various portfolios to the elected members of the general committee. The portfolios include vice-president, secretary, community service, culture and female and male sports.

The college places a strong emphasis on participation in co-curricular activities, with music, sport and the dramatic arts playing a large role in life at Newman. Inter-collegiate soirées are held many times throughout the year, showcasing the talents of the students, with the Very Reverend Peter L'Estrange SJ Prize awarded at the end of the year to the best performing artist in college. The Very Reverend Michael Scott SJ Prize is the annual art competition and the college is a strong participant in all inter-college sporting endeavours, especially in football, netball, softball and tennis. The Albert Power SJ Medallion for Debating is named after Newman college's second rector, the Very Reverend Albert Power SJ. The Choir of Newman College, established in 2002, is a chapel and concert choir.

Newman students also have a strong sporting culture, having won more than half of the intercollegiate football premierships ever played. In 2019 the college won the men's football inter-collegiate premiership.

The Archbishop Daniel Mannix Memorial Lecture started in 1977 and is a highlight of both the university and college academic calendar. It is named in honour of the third Archbishop of Melbourne, who was a driving force behind the formation of the college and for improving the opportunities of Catholic students. Past lecturers have included the Rt Hon Malcolm Fraser, the Hon Kim Beazley, the Hon Sir Joh Bjelke-Petersen, Patrick Dodson, Ita Buttrose, Sir Gustav Nossal, the Hon Alexander Downer, Manning Clark, Peter Garrett, Christine Nixon and the Hon Justice Alastair Nicholson.

Formal dinners are held at 6:30 pm on Tuesdays, Wednesdays and Thursdays throughout the academic year. Attendance is not mandatory, however all members of the college must wear an academic gown and international standard business attire. There are ample occasions during the academic year with a black tie dress code, including the Students' Club, Valete and Commencement dinners. At formal dinners, traditional formalities are observed. Students enter the hall and stand in place prior to the arrival of the members of high table - the rector, members of the senior common room and other invited guests - who process in, and after the bell has been sounded, grace is then said. It is considered discourteous to leave the hall before the final grace. Formal dinner are followed by students' club meetings in the coffee lounge adjacent to the dining room.

All members of the college administration, as well as tutors, academics in residence and postgraduate students (and some older undergraduate students), comprise the Senior Common Room (SCR). Like the junior common room, the SCR annually elect a president, secretary and treasurer, among other portfolios, to organise several events throughout the year.

The college hosts regular Irish studies seminars which are open to the public and which allow scholars the opportunity to present their findings on a wide range of topics.

The original set of campus buildings were built during 1916 to 1918 and were designed by the American architect Walter Burley Griffin, in collaboration with his wife, Marion Mahony Griffin. Burley Griffin also designed furniture for the college, including distinctive chairs, tables and bookshelves for the dining room and the original bedrooms of the college. Much of this furniture remains in day to day use at the college, but some of it has found its way into various art galleries and private collections. This was recognised by its inclusion on the Australian National Heritage List on 21 September 2005, citing "one of the best examples of Griffin’s architecture in Australia" and "Newman College is significant as an outstanding expression of Griffin’s architectural style". The stonework has had substantial renovation to repair over 80 years of damage through exposure and natural degradation of the original stone, under the guidance of Andronas Conservation Architecture and received the Australian Institute of Architects (Victorian Chapter) Heritage Architecture Award 2010.

The Allan & Maria Myers Academic Centre is a modern facility shared by St Mary's College and Newman College. It offers a program of public events and its library contains several special collections that are available to researchers.

The centre houses the Newman College Irish collection (O'Donnell Collection), which was formed in 1924 with a bequest to the college. It originally consisted of around 700 books and 300 pamphlets, many in the Irish language, which were the personal library of Nicholas O’Donnell, a Melbourne Irish language scholar of the early 20th century. Around half the collection consists of historical works. The rest deals with language, literature, biography, religion, politics, description and travel, with some works on music and a few on education.

Every year an O'Donnell Fellowship is bestowed on a visiting scholar so that the holder may do research in the O'Donnell Collection.

The college council, chaired by the Archbishop of Melbourne, oversees the governance of the college. Members include the rector, the other three diocesan bishops of Victoria (of the Sandhurst, Ballarat and Sale dioceses), college alumni and members of the university. Members are appointed by the archbishop. Each year the rector selects two students to be members as student representatives. The president of the students' club is an observer who reports to the council on the life of the college.

The college council instituted the positions of "provost", "deputy provost" and "dean" to oversee the everyday administration and maintenance of the college. The rector remains the official head of the college and remains a Jesuit priest. These positions are currently held by: 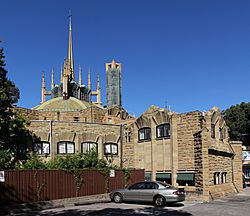 Notable alumni of the college include:

All content from Kiddle encyclopedia articles (including the article images and facts) can be freely used under Attribution-ShareAlike license, unless stated otherwise. Cite this article:
Newman College, Melbourne Facts for Kids. Kiddle Encyclopedia.