Nipton is an unincorporated community in the Ivanpah Valley in San Bernardino County, California. With a population of about 15 – 20, it is located on the northeastern border of Mojave National Preserve, approximately 12 miles (19 km) southeast of Primm, Nevada and the Ivanpah Solar Power Facility. It is accessible via Nevada State Route 164 (also known as Nipton Road).

Nipton was founded on February 9, 1905, with the coming of the first train on the newly constructed San Pedro, Los Angeles & Salt Lake Railroad. It was called "Nippeno Camp" following a nearby discovery of gold. The name was changed to Nipton when the San Pedro, Los Angeles & Salt Lake Railroad merged with the Union Pacific Railroad around 1910. In addition to being a cattle-loading station for several local ranches, the town and depot also supplied numerous mines in the area, becoming a social center for the sparse population of the region.

Early facilities included a school, a U.S. post office, a voter precinct, and several small businesses. A five-room adobe hotel was built in the Mexican Territorial style in 1910.

Nipton also has two historic residences, the Nippeno House and the Hermitage House. 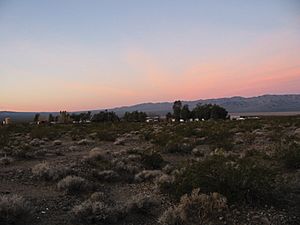 Nipton at dawn in December

The area has a lot of sunshine year round due to its stable descending air and high pressure. According to the Köppen Climate Classification system, Nipton has a mild desert climate, abbreviated "Bwh" on climate maps.

All content from Kiddle encyclopedia articles (including the article images and facts) can be freely used under Attribution-ShareAlike license, unless stated otherwise. Cite this article:
Nipton, California Facts for Kids. Kiddle Encyclopedia.