"Nobody's Perfect" is a song by American recording artist Miley Cyrus, credited as her character Hannah Montana from the eponymous television series. It was released on May 15, 2007 by Walt Disney Records as the lead single from Hannah Montana 2 (2007), the accompanying soundtrack album for its second season. Written by Matthew Gerrard and Robbie Nevil and produced by Gerrard, "Nobody's Perfect" discusses the importance of overcoming mistakes; it is heavily based on synthpop musical styles.

Contemporary music critics spoke favorably of "Nobody's Perfect" in their reviews, and were appreciative of its overall production. The track peaked at number 27 on the U.S. Billboard Hot 100; by exceeding sales of 906,000 copies as of October 2010, it has additionally become the most successful track from the Hannah Montana franchise. A live performance of Cyrus performing the track as Montana serves as the accompanying music video for the track; it was broadcast first on Disney Channel, although it was later included in the Vevo catalog. The song was also performed during Cyrus' headlining Best of Both Worlds Tour (2007–08). 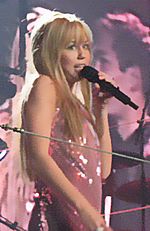 In Hannah Montana, Miley Cyrus portrays the character Miley Stewart, a teenager who lives the secret double life as the pop star Hannah Montana. She stated that "most songs for the first season reflect the show, with Miley or Hannah making sure the other doesn't get caught or whatever," opining that the tracks provided series producers with the opportunity to "make sure that everyone understood the characters". By comparison, Cyrus described material used during the second season as "more speaking out to the fans."

"Nobody's Perfect" was written and produced by Matthew Gerrard; he additionally oversaw its mixing and programming, and performed the guitar, bass, and keyboards. Greg Critchley plated the drums, while Marco Luciana was responsible for the keyboards and Ashley Sauning contributed the background vocals. "Nobody's Perfect" appears as the second track on Hannah Montana 2 with a duration of three minutes and twenty seconds. It is written in the key of C-minor with Cyrus' vocals spanning two octaves from C4 to D5. The song was described by Allmusic as "synth-driven pop", and discusses the importance of overcoming mistakes.

Before being released as the lead single from Hannah Montana 2 on May 15, 2007, "Nobody's Perfect" was included on the reissued two-disc special edition of the original soundtrack Hannah Montana (2006). Within the Hannah Montana storyline, "Nobody's Perfect" was written by Miley's father Robby Stewart; it is first heard in the episode "Get Down, Study-udy-udy" during the second season, where Miley reworks the song into the "Bone Dance" as a way of helping her study for a biology mid-term exam. A live performance of Cyrus performing the track as Montana acts as an accompanying music video for the track; it was initially released on July 3, 2007, although it was reissued through Vevo on December 10, 2010. It was also performed during Cyrus' headlining Best of Both Worlds Tour (2007–08).

Credits adapted from the liner notes of Hannah Montana 2.

All content from Kiddle encyclopedia articles (including the article images and facts) can be freely used under Attribution-ShareAlike license, unless stated otherwise. Cite this article:
Nobody's Perfect (Hannah Montana song) Facts for Kids. Kiddle Encyclopedia.