North Branch is an unincorporated community and hamlet located mostly within Branchburg Township, in Somerset County, New Jersey, United States. A portion of North Branch is located in Bridgewater Township. The hamlet of North Branch, located on both sides of the North Branch of the Raritan River, brings the ambiance of a small village and charm to the area. 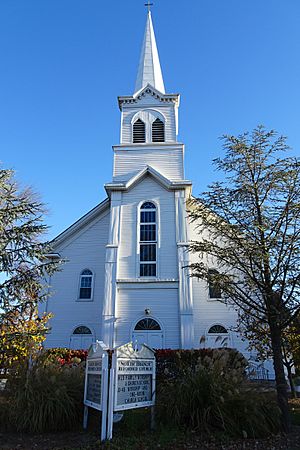 The Branchburg portion of the area is home to the Midland School, a school serving students with developmental disabilities from a number of public school districts. In 2005, the Bridgewater-Raritan Regional School District opened Milltown School, an elementary school located on the east bank of the North Branch river.

People who were born in, residents of, or otherwise closely associated with North Branch include:

All content from Kiddle encyclopedia articles (including the article images and facts) can be freely used under Attribution-ShareAlike license, unless stated otherwise. Cite this article:
North Branch, New Jersey Facts for Kids. Kiddle Encyclopedia.