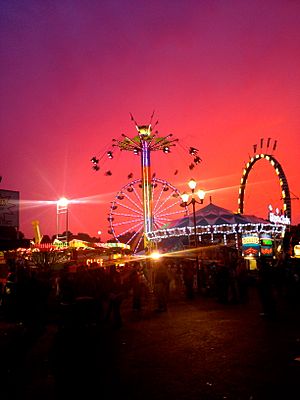 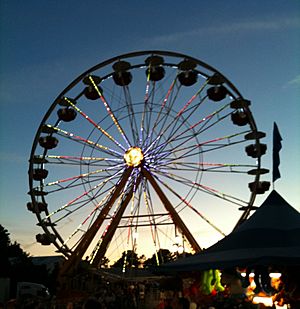 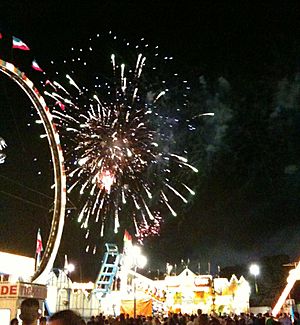 The North Carolina State Fair was first held by the North Carolina State Agricultural Society at a site east of Raleigh in 1853. The event has been held at three different locations since, finding its current home in 1928. It has been celebrated continuously since 1853, with the exceptions of 1861 to 1869 (during the Civil War and Reconstruction), 1926 to 1927 (when the Agricultural Society disbanded and the state Agriculture Department took over operations), 1942 to 1945 (during World War II) and 2020 (see details below). In the 1870s and 1880s, the mills in Winston-Salem would close so that workers could attend the state fair in Raleigh.

The fair has been held at its present site on the western edge of Raleigh since 1928. The 344-acre site includes many notable buildings, including Dorton Arena, a 7,500-seat arena constructed with a unique large suspended roof.

Held for 11 days in mid-October, the fair attracts more than a million people to the N.C. State Fairgrounds in Raleigh. In 2010, the fair broke an attendance record with 1,091,887.

Along with Dorton Arena, the North Carolina State Fair Commercial & Education Buildings are listed on the National Register of Historic Places. The pair of large rectangular exhibition halls were built in 1928, and are stucco-covered Mediterranean Revival style buildings. The buildings appear as a single building because of their unified facade and design, but are a large rectangular complex of two buildings, 504 feet in length and 80 feet in depth. They feature twin, tower-flanked entrances and glazed terra cotta ornamentation.

On July 29, 2020, in response to the ongoing COVID-19 pandemic, it was announced that the 2020 North Carolina State Fair would be cancelled.

The Antique Farm Machinery exhibit, located near the Village of Yesteryear displays a collection of vintage farm tools including traditional spinning wheels, horse-pulled tobacco and cotton pickers and planters, and aged hand reapers. The exhibit also features an old milk bottle display, and Model-T engine and more than a dozen Allis-Chalmers, Farmall, John Deere and Silver King tractors from the 1930s through the 1950s.

This exhibit replaced the Green NC exhibit during its debut in 2011. In the exhibit, visitors can go on a fun and interactive career personality scavenger hunt to learn about the wide variety of career paths in the agricultural industry.

This exhibit takes children through the growing and harvesting process, going from farm to table. Visitors to Field of Dreams can get a basket at the exhibit entrance and pick crops such as apples, strawberries and cucumbers. Along the way, they learn about other crops and how they turn into everyday staples, such as peanut butter and cereal. After picking the crops, children can then "sell" their harvest at the Field of Dreams Farmers Market for fair money. The money can then be spent at the Field of Dreams Grocery Store.

This oasis on the fairgrounds features winding pathways through beautiful gardens grown by local organizations. More than 90 demonstrations are held throughout the fair, with experts offering advice on such topics as pumpkin carving, flower arranging and proper plant care.

Got to Be NC Agriculture Tent

If you want the best, it's "Got to Be NC." In this exhibit, visitors can discover and sample food products from across North Carolina. More than 20 local vendors participate in the exhibit throughout the course of the fair.

Heritage Circle is a step back in time. There is plenty of activity at the circle, from the crew maintaining the tobacco barn during the fair to the craftsmen demonstrating their traditional methods of woodcarving, blacksmithing and chair-building. Visitors can also enjoy the taste of homemade ice cream, apple cider or a hush puppy from the Old Grist Mill as they listen to engaging stories or the sweet melodies from the Bluegrass Stage.

Fairgoers can see cattle, sheep, goats, swine and learn more about the various breeds of farm animals raised in North Carolina. More than 60 animals are on display, including the grand and reserve champions from the junior market steer, lamb, goat, turkey and barrow shows.

One of the N.C. State Fair's most popular and enduring attractions, the Village of Yesteryear features more than 75 artists and crafters creating, displaying and selling time-honored handmade crafts. Village crafters spin wool into yarn, weave yarn into cloth, make rugs, turn pottery, carve wooden bowls and utensils, make split-oak baskets and more. Native American crafts such as hand-coiled pottery, beadwork and stone carving are also featured. Kids and kids-at-heart can even make their own dolls or stuffed toy to take home.

Division IV categories include family and consumer sciences, such as culinary, specialty cooking contest, clothing and home furnishings. The division also houses all the 4-H competitions.

Division V competitions are made up of special exhibits on the fair. These include the Folk Festival, Department of Labor apprentice contest, horseshoe pitching contest, handicrafts and hobbies, and the essay contest.

The Folk Festival was first held at the N.C. State Fair in 1948 to showcase North Carolina's traditional music and dance. More than 1,500 people participate each year for the coveted Bascom Lamar Lunsford Trophy. The trophy was named after the festival founder. 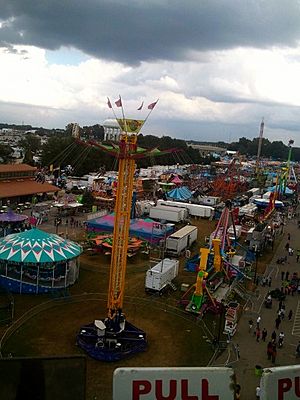 The N.C. State Fair offers plenty of free entertainment for the price of admission ticket. There are roaming ground entertainers across the fairgrounds, staged entertainment acts in Kiddieland Fun Park and outside the Expo Center, as well as continuous musical performances on the Bluegrass and Waterfall stages.

The Sam Rand Grandstand is home to several special events during the N.C. State Fair. The grandstand is the site of the annual Tractor Pull and Demolition Derby. In addition, there are performances by Keith King and the King Action Sports Stunt Show. The stunt show includes freestyle, flatlander, ramp riders, inline skaters, skateboarders and Motocross.

Kiddieland Fun Park, located near Gate 1, is nestled under the trees near the Kiddieland carnival area. This section of the N.C. State Fair caters to children with entertaining shows, rides and attractions, plus space to take a break from the Midway. 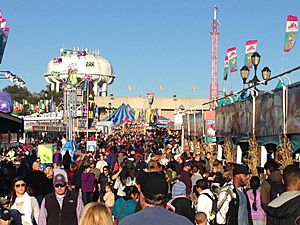 People walk around the 2015 fair midway

The N.C. State Fair has the largest midway at any state fair.

Rides require tickets; some cost two to three tickets, while the wilder ones are five to six tickets.

In 2006, Powers Great American Midways, based out of Burgaw, North Carolina (corporate office is in Corfu, New York) won the midway contract for the fair. The company provides more than 100 rides each year, as well as carnival games and concession stands on the midway.

Since then, Powers Great American Midways has made steps to create an eco-friendly midway. These steps including the addition of LED lighting on nearly all the rides and using B20, a soybean-based biodiesel, to power all of the generators.

In 2011, Powers unveiled the refurbished SkyDiver, which is similar to a Ferris wheel in shape. The difference is that passengers ride in cages and can spin the cages in a barrel roll fashion. The 90-foot-tall ride was completely overhauled with a spectacular lighting display composed of about 100,000 energy-efficient LED lights.

In 2008, Susan Ogden of Raleigh helped name the Pinfarri RC-48 roller coaster when it premiered on the midway. The Toxic Shock is a blue and orange roller coaster that is known for twists and banked curves.

The train makes a loose turn out of the station and up a steep 70-foot (21 m) lift hill. It then proceeds down a banked twisting drop and into the first of three over-banked curves. At the base of the third over-banked curve, the track stays moderately banked and around a 3.0 g helix. The track levels and pulls into the station.

Another roller coaster, the Avalanche, is milder. The car pulls out of the station and around a 180-degree right turn onto the lift. The car ascends the 50-foot (15 m) lift and around another 180 turn to the right. The car then descends a 40-foot (12 m) drop, reaching 54 mph before climbing 40 feet (12 m) into the first banked curve. Around that and down a second 20-foot (6.1 m) drop that then takes you back up into the spiral, banking more heavily as you descend. You are warned about high g forces here but there are no strong g forces on this ride. When you finally exit the spiral, you descend a small dip and pull into the station.

The State Fair added a new way to get around in 2016 when they built the State Fair Flyer, a 40-foot-high sky lift that has 126 seats that hang from a cable that stretches more than 1,400 feet across the fairgrounds. American Sky Lifts, based in Sanford, owns and built the massive machine at a cost of $1 million. A one-way trip on the State Fair Flyer costs $5, a round-trip ride is $8. The ride moves at 2 mph and has a lap restraint to keep passengers in their seat. American Sky Lifts has a 10-year lease to have the lift on the fairgrounds with an option for a 10-year renewal.

All content from Kiddle encyclopedia articles (including the article images and facts) can be freely used under Attribution-ShareAlike license, unless stated otherwise. Cite this article:
North Carolina State Fair Facts for Kids. Kiddle Encyclopedia.