The Northern Cricket Frog (Acris crepitans) is a species of small Hylid frogs. They are native to the United States and northeastern Mexico. Northern cricket frogs are small frogs, between 0.75 and 1.5 inches (19–38 mm) long. They eat crickets and small insects. They usually reproduce in April through May. Tadpoles hatch within a few days.

Northern cricket frogs are diurnal and generally active much of the year, except in midwinter in northern areas when the water is frozen. Their primary diet is small (13 to 38 mm (0.5 to 1.5 in) long) insects, including mosquitos. They are, in turn, preyed upon by a number of species, including birds, fish, and other frogs. To escape predators, they are capable of leaping up to 3 feet in a single jump and are excellent swimmers. 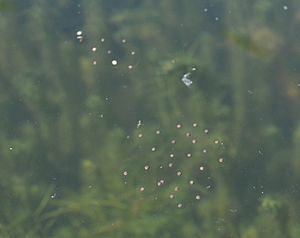 Breeding generally occurs from May through July. The males call from emergent vegetation with a high-pitched, short, pebble-like call which is repeated at an increasing rate. The sound suggests pebbles being clicked together, much like a cricket, hence the name. One egg is laid at a time, generally attached to a piece of vegetation. The 14 millimetres (0.55 in) tadpoles hatch in only a few days, and undergo metamorphosis in early fall. Maturity is usually reached in less than a year.

Cricket frogs prefer the edges of slow-moving, permanent bodies of water. Large groups of them can often be found together along the muddy banks of shallow streams, especially during premigratory clustering. The northern cricket frog has been observed to hibernate upland, often at considerable distances from water. 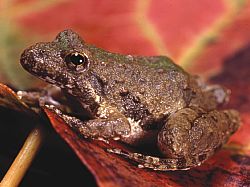 All content from Kiddle encyclopedia articles (including the article images and facts) can be freely used under Attribution-ShareAlike license, unless stated otherwise. Cite this article:
Northern cricket frog Facts for Kids. Kiddle Encyclopedia.