Novato Creek is a stream in eastern Marin County, California, United States. It originates in highlands between Red Hill and Mount Burdell above the city of Novato, California, and flows 17 miles (27 km) before emptying into San Pablo Bay south of Petaluma Point.

Miwok and Pomo people were the earliest residents of the watershed. Olompali, the site of a significant Miwok village, is located at the southern base of Mt. Burdell. In 1839 Mexican land grants established Rancho Novato. Grazing brought a host of invasive annual grassland plants that eventually dominated the deep-rooted native perennial grasses and altered runoff rates.

By 1856 extensive apple orchards occupied the valley floor and many of the creeks had been channelized for irrigation. The tidal marshlands had also been diked and drained for agriculture (primarily oat-hay production) by the middle of the nineteenth century. In the 1880s the creek was dredged to make way for schooners bound for San Francisco.

Novato, one of the four townships in existence when Marin County formed in 1850, was incorporated in 1960. Ground was broken for Hamilton Air Force Base in 1932 and dedicated in 1935 (the base was decommissioned in 1974, and designated as a historic district in 1988).

Land use changes have increased sediment supply and decreased sediment transport, causing the lower reaches of Novato Creek to become shallower. In addition, the construction of Stafford Dam (starting in 1952) increased its drainage area by 5.2 square miles (13 km2). 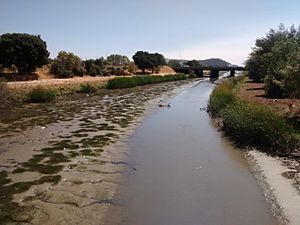 The Novato Creek watershed basin is 45 square miles (120 km2). Novato Creek is joined (heading downstream) by six major tributaries along its 17-mile (27 km) length: Leveroni, Bowman Canyon, Warner, Vineyard Creek, Arroyo Avichi, Arroyo de San Jose, and Simmonds Slough. Arroyo San Jose itself has two tributaries. It is joined on the left by Ignacio Creek and on the right by Pacheco Creek (at Pacheco Pond) just before entering Novato Creek. Novato Creek and its tributaries are often eroded, incised channels. It is one of the driest watersheds in Marin County.

Novato Creek begins to the west of Mount Burdell and initially descends to the west. However, it soon turns south, then east to feed into Stafford Lake. It descends through the city of Novato. East of Novato it crosses under U.S. Route 101 and State Route 37 before flowing through Bel Marin Keys and entering the northwest corner of San Pablo Bay.

Just before entering the Bay, Novato Creek flows along Bel Marin Keys, a community on the creek and a series of adjacent lagoons, at an elevation of 10 feet (3.0 m) above sea level. 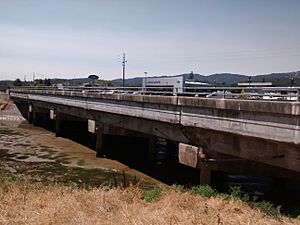 Novato Creek is spanned by many bridges, including:

All content from Kiddle encyclopedia articles (including the article images and facts) can be freely used under Attribution-ShareAlike license, unless stated otherwise. Cite this article:
Novato Creek Facts for Kids. Kiddle Encyclopedia.