O'Fallon is a city in St. Clair County, Illinois, United States. The 2020 census listed the population at 32,289. The city is the second largest city in the Metro-East region and Southern Illinois. It sits 5 miles (8.0 km) from Scott Air Force Base and 18 miles (29 km) from Downtown St Louis.

Like its namesake in St. Charles County, Missouri, O'Fallon is part of the St. Louis Metropolitan Statistical Area. This makes O'Fallon (along with the two Troys in Illinois and Missouri) one of the few pairs of like-named municipalities to be part of the same MSA.

Founded in 1854, O'Fallon's namesake comes from Colonel John O'Fallon who was a wealthy gentleman from St. Louis. In downtown O'Fallon, a Baltimore and Ohio Railroad railroad depot was built, which helped put O'Fallon on the map. City lots were platted and sold at a public auction on May 18, 1854. A post office was established the following year and the city began attracting German settlers looking for fertile farming land. On January 27, 1874, O'Fallon was incorporated as a village. On March 14, 1905, the citizens voted for a change to the city form of government. Since its founding, O'Fallon has gained population every year except 1930, when the census showed a net loss of six residents. 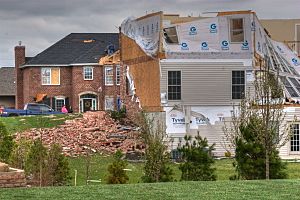 Growth in O'Fallon has accelerated since the 1980s. Following the expansion of Interstate 64, the 1990s saw a building boom with the construction of several now-established subdivisions including Thornbury Hills, Nolin Creek Estates, Fairwood Hills, Deer Creek, Forest Hills, and the completion of Fairwood East. O'Fallon Township High School's main campus at 600 South Smiley Street has undergone numerous additions over the past decades to ease overcrowding, including the creation of the separate 9th Grade Milburn Campus. A new city hall was completed in 1996. More than 50 percent of O'Fallon's housing is less than 15 years old. 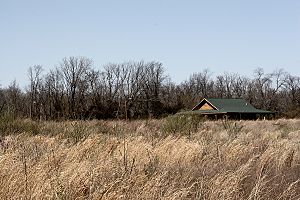 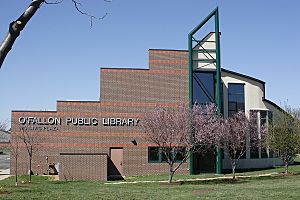 All content from Kiddle encyclopedia articles (including the article images and facts) can be freely used under Attribution-ShareAlike license, unless stated otherwise. Cite this article:
O'Fallon, Illinois Facts for Kids. Kiddle Encyclopedia.