Oak Creek Canyon is a river gorge located in northern Arizona between the cities of Flagstaff and Sedona. The canyon is often described as a smaller cousin of the Grand Canyon because of its scenic beauty. State Route 89A enters the canyon on its north end via a series of hairpin turns before traversing the bottom of the canyon for about 13 miles (21 km) until the highway enters the town of Sedona. The Oak Creek Canyon – Sedona area is second only to Grand Canyon as the most popular tourist destination in Arizona. 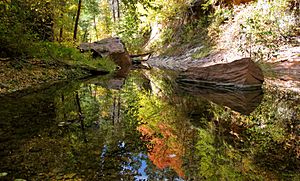 Oak Creek, a tributary of the Verde River, flows along the bottom of the canyon, and is one of the few perennial streams in the high desert region of northern Arizona. Oak Creek is largely responsible for carving the modern Oak Creek Canyon, although movement along the Oak Creek Fault, a 30-mile (48 km) long north–south normal fault line, is thought to have played a role as well.

Oak Creek enters more open country below Sedona. It meanders past the communities of Page Springs and Cornville, and reaches its confluence with the Verde River about 6 miles (10 km) southeast of Cottonwood. In June 2006, the southern portion of the canyon, near Slide Rock State Park, was affected by a 4,300-acre (17 km2) wildfire known as the "Brins Fire". 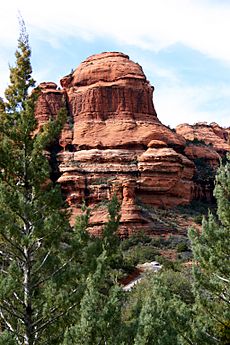 The spectacularly eroded walls of the canyon are formed mostly of Paleozoic sedimentary rocks. Exposures of the Kaibab Limestone, (the geologic formation found at the top of the Grand Canyon), and the Toroweap Formation are found only at the northern end of the canyon. The more predominant rock units exposed in the cliffs of southern Oak Creek Canyon are the buff to white colored, frequently cross-bedded Permian Coconino Sandstone and the red sandstones of the Permian Schnebly Hill Formation. Unlike all the other formations exposed in Oak Creek Canyon, the Schnebly Hill Formation is not present at the Grand Canyon. The youngest rocks exposed in the canyon are a series of basalt lava flows that form the east rim, the youngest of which is an estimated 6 million years old. 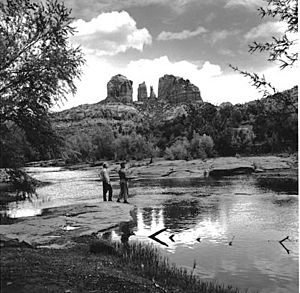 Oak Creek Canyon is located within the Coconino National Forest. Portions of the canyon have been designated federal wilderness areas as part of the Red Rock-Secret Mountain Wilderness. The United States Forest Service operates several campgrounds, picnic areas, and recreation areas within the canyon. Slide Rock State Park, home to a natural water slide along Oak Creek, is also located within Oak Creek Canyon. Other recreational activities include swimming and fishing in Oak Creek. There are 49 fishable miles along the creek where rainbow trout, brown trout, largemouth bass, smallmouth bass, catfish (channel) and catfish (flathead) can be found. Hiking the many trails leading into side canyons or up to the rim of the canyon is a popular activity for the area. The trail leading the first 3 miles (4.8 km) up the West Fork of Oak Creek, a 14-mile (22.4 km) long narrow side canyon, is the most popular trail in the Coconino National Forest.

All content from Kiddle encyclopedia articles (including the article images and facts) can be freely used under Attribution-ShareAlike license, unless stated otherwise. Cite this article:
Oak Creek Canyon Facts for Kids. Kiddle Encyclopedia.