The Oakland California Temple (formerly the Oakland Temple) is the 15th constructed and 13th operating temple of The Church of Jesus Christ of Latter-day Saints (LDS Church). During a January 23, 1961 meeting, plans for the temple were announced by David O. McKay. Ground was broken on May 26, 1962, with the cornerstone laid May 25, 1963, and dedication on November 19, 1964. 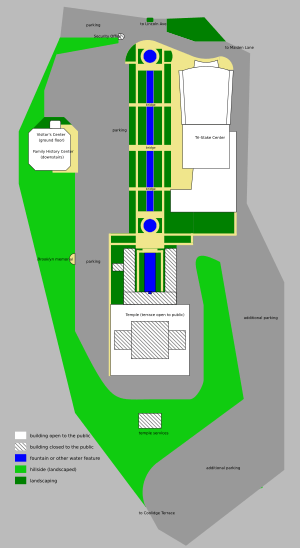 A map of the grounds of the Oakland California LDS Temple.

Built in 1950s, the Interstake Center is the oldest LDS Church building at the site. Originally referred to as the Tristake Center, the building served the San Francisco, Oakland, and Berkeley stakes The Center includes two chapels for sacrament meetings, an auditorium, a gymnasium and several classrooms and offices.

The auditorium seats 1,600 people and has a 60-foot (18 m) stage. Besides the three resident organizations and the temple pageant, many Brigham Young University performing arts groups have performed in the auditorium.

The site has a visitors center that was opened in 1992. There is also a Family History Center, an LDS Employment Center, an LDS Distribution Center and the headquarters of the California Oakland–San Francisco Mission. In addition, a small memorial to the Brooklyn is located to the side of the property.

The temple sits on a prominent site in the Oakland hills and has become a local landmark. Through the front courtyard are stairways which lead to the temple terrace situated above the ground floor of the temple. From the temple grounds and terrace are views of the Bay Area, including downtown Oakland, the Bay Bridge, Yerba Buena Island, downtown San Francisco and the Golden Gate Bridge. 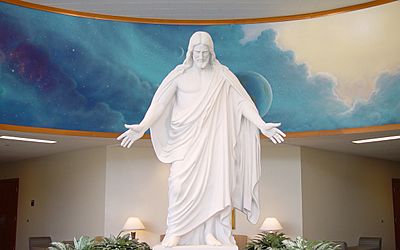 A copy of Bertel Thorvaldsen's Christus in the Visitors' Center

The temple grounds are set on 18.1 acres and includes a long cascading waterfall, reflection pool, walled courtyard, fountains, and a roof-terrace garden. For many local photographers, the Oakland Temple garden & reflection pool are a hotspot for taking beautiful photos. It is a particular hotspot for photoshoots of Catholic quinceañeras. The grounds are accented by flowers, palm trees, and a formal-style man-made river running from one fountain to the other.

Every holiday season since 1978, the temple grounds are lit up with thousands of Christmas lights. It originally started with 50,000 multi-colored lights. In 1998 the Christmas display had grown to 500,000 lights that could be seen from the San Francisco bay. Along with the Christmas lights, musical performances and dances are organized to celebrate Christmas and the birth of Jesus Christ. 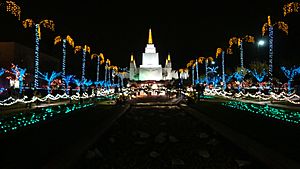 The temple at Christmas

The auditorium at the Interstake Center can seat 1,600 people. In the event that more seating is needed, the auditorium can be extended into a large cultural hall that's large enough to fit two full-size basketball courts. The cultural hall was used years ago as a practice facility for the NBA's Golden State Warriors. The concert hall is home to the Temple Hill Symphony Orchestra, Temple Hill Choir, and the Temple Hill Dance Company. In addition, the concert hall hosts other musicians, singers, and performance groups.

Genealogical activities by members of the Church of Jesus Christ of Latter-Day Saints date back decades prior to the building of the Oakland California Temple. 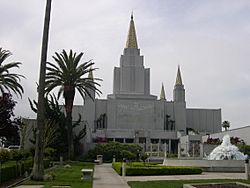 Designed by architect Harold W. Burton in 1962, the temple features a combination of Art Deco, Asian, and midcentury elements. Recent renovations in 2019 renovation took place lead by architect David Hunter & interior designer Karen Willardson. The building has many Asian-inspired elements represented in the structure of the building along with the interior design. As with other temples built by The Church of Jesus Christ of Latter-Day Saints, the Oakland California Temple was built using the “finest craftsmanship and materials available.”

The temple sits on a prominent site in the Oakland hills and has become a local landmark. Through the front courtyard are stairways which lead to the temple terrace situated above the ground floor of the temple. From the temple grounds and terrace are views of the Bay Area, including downtown Oakland, the Bay Bridge, Yerba Buena Island, downtown San Francisco and the Golden Gate Bridge. The grounds are accented by flowers, palm trees, and a formal-style man-made river running from one fountain to the other.

Located in the city of Oakland, California, at 4770 Lincoln Ave, it is the only LDS temple built with a modern five-spire design. The five exterior golden spires reflect the sun with the tallest spire reaching 170 feet. The exterior of the temple is reinforced concrete faced with sierra white granite from Raymond, California. On the north and south faces of the temple are two decorative friezes; it is the last LDS temple to have such. The back (south side) is a depiction of Christ descending from heaven to the people of the American continent soon after his resurrection in the Holy Land. A north face of the building features a relief sculpture that depicts Christ teaching His disciples, which includes both men and women. Within the front garden courtyard there is a statue of children in front of a bronze plaque bearing a scripture from 3 Nephi chapter 17, from the Book of Mormon, relating how Christ blessed the children during his visit to the people of ancient America. Near the main entrance of the temple, "Holiness to the Lord, the House of the Lord" is inscribed.

At night, the exterior of the building is lit up at night. Some refer to it as “the beacon on the hill” because the temple is visible to much of the bay area. The FAA uses the Oakland California temple as a navigation beacon.

The goal of the interior design is to bring a remembrance of Jesus Christ to those who visit the Oakland California Temple. The interior of the temple décor is “subdued, with shades of tan and brown and traditional furnishings.” Found throughout the temple are paintings and other pieces of artwork. The walls feature white oak paneling accented by marble flooring. Artwork includes paintings, murals, and relief artworks. The lobby has a relief artwork representing Adam and Eve and another with Christ in the garden at Gethsemane. Other paintings throughout the building are a mix of scenes from the life of Jesus Christ and nature scenes of California landscapes. Several rooms include full length mirrors, opulent crystal sconces, and refined oriental designed seating. The baptistry features gold leaf decorations on the ceiling, marble columns, and bronze railings. The sealing rooms are adorned with dark cherry wood paneling, backlit marble altars, and mirrors that create an infinite reflection. Some of the sealing rooms feature barrel vaulted ceilings. 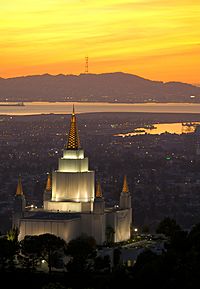 The temple and Oakland at sunset

The building of the Oakland Temple, as well as other temples in California was planned as early as 1847. The Mormons who had traveled by ship around Cape Horn to California were told by Brigham Young that "in the process of time, the shores of the Pacific may yet be overlooked from the Temple of the Lord."

On February 23, 2017 the LDS Church announced that beginning February 2018, the temple would close for renovations that will be completed during 2019. Following completion of the renovations, a public open house was held from 11 May through 1 June 2019, excluding Sundays. The temple was rededicated on Sunday, June 16, 2019, by Dallin H. Oaks. The renovation included putting the front doors back in use, updating upholstery, installing new carpeting, updating the electrical system, new paneling, and restoring an outdoor reflecting pool. A new visitors waiting area was added that features added windows that gather light reflected from the reflection pool outside.

In 2020, the Oakland California Temple was closed in response to the coronavirus pandemic.

And it Came to Pass Pageant

See also: List of pageants of The Church of Jesus Christ of Latter-day Saints

In the nearby Interstake Center, local members performed a Latter-day Saint pageant (an annual theatrical production) for many years. The pageant, commonly known as the "Temple Pageant," was a musical stage production rehearsing the history and legacy of the LDS Church. It was one of only a few "temple pageants" around the country; others include the Easter Pageant in Mesa, Arizona, and the Mormon Miracle Pageant in Manti, Utah. Until its retirement, it was the only such pageant performed indoors as well as the only one to be fully accompanied by a live orchestra. Initially, the pageant consisted of three acts performed over three consecutive nights; however, it was eventually shortened to an hour and a half. In November 2007, a letter sent to stake and mission presidents in the region from D. Todd Christofferson, then of the Presidency of the Seventy, indicated that the pageant would no longer be held.

The Temple Hill Symphony Orchestra was formed in 1985. It has 52 members, about a third of whom are not Latter-day Saints. It has other sponsors besides the LDS Church and is a non-profit organization that offers free concerts. It is currently directed by John Pew.

There is also a Temple Hill Public Affairs Council which seeks to use the resources on the location to raise awareness of the LDS Church and its mission. As of 2007, it was directed by Lorenzo Hoopes.

All content from Kiddle encyclopedia articles (including the article images and facts) can be freely used under Attribution-ShareAlike license, unless stated otherwise. Cite this article:
Oakland California Temple Facts for Kids. Kiddle Encyclopedia.