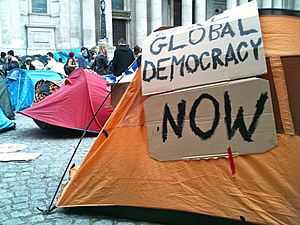 Occupy London (also known as Occupy London Stock Exchange) is a peaceful protest and demonstration. The aims of the protest is to demand dialogue and to draw attention to several different issues such as the widening gap between rich and poor people in the UK as well as the great influence that companies and business groups have on decisions made by the UK government.

The protest is mostly found in a group of tents that have been put up in the grounds of St Paul's Cathedral in London, United Kingdom. The Cathedral is just in front of the London Stock Exchange. The protest started on 15 October 2011 with the Occupy Wall Street protests in New York, United States. On 22 October 2011 another protest was set up in Finsbury Square which is about 1 km away.

A wide picture of the protest outside St Paul's Cathedral

The protesters are not part of a political party and they do not have a leader.

All content from Kiddle encyclopedia articles (including the article images and facts) can be freely used under Attribution-ShareAlike license, unless stated otherwise. Cite this article:
Occupy London Facts for Kids. Kiddle Encyclopedia.