As technology has progressed over the years, oil companies have extended drilling and production farther and farther from shore, and into deeper and deeper waters. In 1937 Superior Oil of California and Pure Oil constructed a platform just over a mile from the shore at a depth of 13 feet. A year later, Humble Oil built a mile-long wooden trestle with railway tracks into the sea at McFadden Beach on the Gulf of Mexico, placing a derrick at its end - this was later destroyed by a hurricane. A platform was installed in a hundred feet of water for the first time in 1955; in two hundred feet of water in 1962; and in a thousand feet of water in 1979. "By 1970, the technology existed to drill in 2,000 feet of water and actual exploratory drilling was taking place at 1,400 feet." By 2009, more than 70% of Gulf of Mexico oil production came from wells drilled in depths greater than 1,000 feet (300 m), almost double from the percentage ten years ago.

In April 2016, the US Bureau of Safety and Environmental Enforcement (BSEE) issued final well control regulations to improve the effectiveness of offshore safety.

The Deepwater Horizon oil spill (also referred to as the BP oil spill, the BP oil disaster, the Gulf of Mexico oil spill, and the Macondo blowout) began on April 20, 2010, in the Gulf of Mexico on the BP-operated Macondo Prospect. Killing eleven people, it is considered the largest marine oil spill in the history of the petroleum industry and estimated to be 8% to 31% larger in volume than the previous largest, the Ixtoc I oil spill. 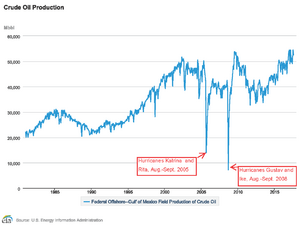 Oil production in the US Federal zone, offshore Gulf of Mexico

The state of Louisiana issued its first offshore oil and gas lease in 1936, and the following year the Pure Oil Company discovered the first Louisiana offshore oil field, the Creole Field, 1.2 miles (1.9 km) from the shore of Cameron Parish, from a platform built on timber pilings in 10-to-15-foot-deep (3.0 to 4.6 m) water. Today, there are more than 4,000 production platforms and drilling rigs off the coast of Louisiana.

The eastern Gulf of Mexico, which includes offshore Gulf Coast Florida, has never been a petroleum-producing area. From the 1950s to the 1990s, oil companies drilled exploratory wells off the Gulf Coast of Florida. Nineteen wells were drilled in state waters, and forty were drilled in federal waters.

In the 1970s and early 1980s, oil companies drilled 16 wells on and around the Destin Dome, in federal waters off the Florida Panhandle; none were successful. Then from 1987 to 1995 Chevron made commercial gas discoveries on the Destin Dome 25 miles (40 km) off the coast. The discovery extended the Norphlet productive trend, which is highly productive in Alabama state waters in Mobile Bay. However, the state of Florida objected to plans to produce the deposits, and in May 2002, the US government agreed to buy back 7 leases from Chevron, Conoco, and Murphy Oil for $115 million.

In 1947, the state of Florida issued a long-term oil and gas lease for state waters in the Gulf, stretching from Apalachicola Bay in the north to Naples in the south. The lease, which now belongs to Coastal Petroleum, was renegotiated in 1975 to leave Coastal with partial rights from 0–7.4 miles (0.0–11.9 km) from the shore, and full rights to state waters from 7.4–10.4 miles (11.9–16.7 km) from the shore. Florida has since banned offshore drilling in state waters, and has a long-running legal dispute with Coastal over Coastal's efforts to drill the offshore lease.

All content from Kiddle encyclopedia articles (including the article images and facts) can be freely used under Attribution-ShareAlike license, unless stated otherwise. Cite this article:
Offshore oil and gas in the Gulf of Mexico (United States) Facts for Kids. Kiddle Encyclopedia.