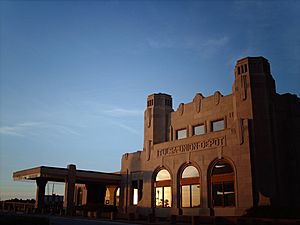 Headquarters of the Hall of Fame, the Tulsa Union Depot

The Oklahoma Jazz Hall of Fame, located in Tulsa, Oklahoma, is a non-profit organization that honors jazz, blues and gospel musicians in the state of Oklahoma. Housed in the former Tulsa Union Depot, which it now calls the Jazz Depot, the Hall of Fame is a music venue that hosts regular jazz performances. It is also a museum, displaying photographs, biographical information, artifacts, and memorabilia from musicians such as Chet Baker, Earl Bostic, Barney Kessel, Charlie Christian, Tommy Crook, Pat Kelley, and Jimmy Rushing.

In 1991, guitarist Barney Kessel made a speech about improvised music at the Hall of Fame; this was his last recorded public appearance before a stroke forced him to retire in May 1992. Singer Joe Lee Wilson also made his last public performance at his 2010 induction into the Hall of Fame. 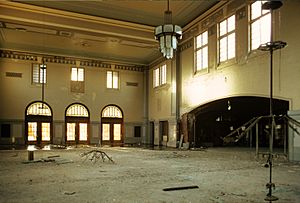 The Tulsa Union Depot remained empty for nearly twenty years before being renovated and re-purposed for public use.

The Oklahoma Jazz Hall of Fame was recognized by the Oklahoma Legislature in 1988, with legislation authored by State Senators Maxine Horner and Penny Williams. The Hall of Fame was one of several organizations created in the North Tulsa “renaissance” dedicated to reconstructing the city’s historic Greenwood district after the Tulsa Race Riot. The organization was originally housed in the Greenwood Cultural Center, and co-sponsored a yearly celebration of Oklahoman black music tradition called “Juneteenth on Greenwood.”

In 2004, Tulsa County’s Vision 2025 project allocated $4 million to purchase and renovate the Tulsa Union Depot for use by the Oklahoma Jazz Hall of Fame. Work on the building was completed and the building officially opened on June 19, 2007.

In November, 2020, The Tulsa County Industrial Authority filed a lawsuit to terminate the building lease with the Jazz Hall and to recover $8,474 in past-due taxes and utilities. The suit alleged that the Jazz Hall was so far behind in its utility payments that electricity to the building was turned off on October 19th. In January of 2021 the Jazz Hall declared bankruptcy, at least temporarily staying the eviction.

All content from Kiddle encyclopedia articles (including the article images and facts) can be freely used under Attribution-ShareAlike license, unless stated otherwise. Cite this article:
Oklahoma Jazz Hall of Fame Facts for Kids. Kiddle Encyclopedia.