Old Junee is a town community in the central east part of the Riverina and situated about 7 kilometres north west from Junee and 16 kilometres east from Marrar. 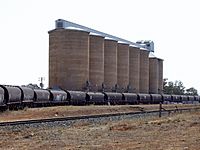 Junee Post Office opened on 1 May 1862 and was renamed Old Junee in 1881 when the town of Junee moved to its current location near the railway station.

The school at Old Junee was opened in 1880 and conducted in the old Methodist Church building under the name "Provisional School, Junee". A short time later Junee Junction, five miles distant, sprang up and so the name of this school and the village was, in 1893, changed from Junee to Old Junee. The school at Junee Junction is now known as Junee School.

Mr Harry D. Balmain was the first teacher and the oldest record at the school dates from 14 May 1880. For the portion of the quarter ending June, 1880, the total enrolment was 39 (20 boys, 19 girls), the average being 22.3. An amount of £2/8/0 was received in fees, there being no "gratuitous" scholars. The return was signed by Mr Samuel Storey as a member of the School Board. Mr Storey officially opened the first school in 1880, a second building attached to the residence in 1882, and on Empire Day, 1913, the new, commodious building of two large rooms.

In 1894 Mr W. H. Bullen was the Teacher-in-Charge and remained there until 1912 when Mr. W. E. Cook was appointed. Mr Bullen had leave of absence for 3 months in 1902 after 20 years' service and was relieved by Messrs Hallman and Dawson for that period. In 1895 an urgent application was made for fencing to provide for four horses - no doubt for the use of children arriving at school by horse and also in that year the school acquired 8 acres (3.2 ha) for the school paddock.

In 1899 an application was made for the use of the playground for a Moonlight Concert in aid of the Cricket Cub - evidence of the importance of the little country school in the community.

Additions were made to the school buildings from time to time. In 1901 additions in the form of bathroom and pantry for the residence, again in 1907 and 1911 a new bell post was required and finally in 1913 a new school was provided as mentioned earlier when Mr Cook was Headmaster with Miss Catherine Sly as assistant and the enrolment was 75 pupils. At this time the school was Class IV, the area of the grounds was 2 acres (0.81 ha), with a reserve of 8 acres not adjoining. An additional area of 1 acre for playground purposes had been surveyed but as yet not dedicated.

In 1928 the Assistant Teacher, Mr L. Goodwin, on 17 February 1928, was unable to report for duty owing to a washaway on the railway line. There was a cloud burst storm in Junee at this time and a storage dam near the cemetery in Junee burst and flooded the town. Many of the business houses were flooded.

In 1929, when school opened, there was no water available so an application had to be made to buy and transport water from the railway station. During the early thirties enrolment had dropped considerably and difficulties were experienced in keeping an assistant teacher and at one stage in 1935 (5 March 1935, there was no teacher at all. In that year 30 children competed in the P.S .A.A.A. sports.

Improvements to the school continued: In 1927 the school accepted a gift of 100 volumes of suitable literature from Mr & Mrs J. LeGay Brereton. In 1938 fly screens were supplied for the school and the parents fenced the school - all catering to the varied needs of the children. In 1938, also, Mr L. W. Storey donated a piece of land - 2 roods 25 perches (2,656 m2) to the school. The school closed in 1966.

All content from Kiddle encyclopedia articles (including the article images and facts) can be freely used under Attribution-ShareAlike license, unless stated otherwise. Cite this article:
Old Junee Facts for Kids. Kiddle Encyclopedia.