Ondřej Pavelec ( born 31 August 1987) is a former Czech professional ice hockey goaltender. Drafted in the second round, 41st overall, by the Atlanta Thrashers in 2005, he stayed with the team as they became the Winnipeg Jets in 2011, and played his final season with the New York Rangers. During the 2012–13 NHL lockout, Pavelec played for Bílí Tygři Liberec of the Czech Extraliga (ELH) and Pelicans of the Finnish SM-liiga. 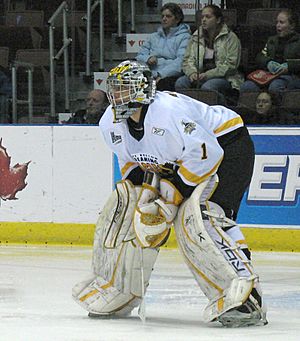 Before playing the NHL, Pavelec played 2 seasons with the Cape Breton Screaming Eagles of the Quebec Major Junior Hockey League (QMJHL). During his time with Cape Breton, Pavelec was able to win the Jacques Plante Memorial Trophy for having the lowest GAA in the league, the Raymond Lagacé Trophy for defensive rookie of the year and the RDS Cup for rookie of the year.

He was drafted by the Atlanta Thrashers with the 41st overall pick in the 2005 NHL Entry Draft. He played 7 games with the Thrashers and was sent down to their AHL affiliate team, the Chicago Wolves. During that season with the Wolves, Pavelec helped them win a Calder Cup. He spent 5 seasons between both the Wolves and Thrashers.

On October 8, 2010, during a game against the Washington Capitals, Pavelec collapsed and lost consciousness. He was stretchered off the ice and was taken to the hospital. The doctors said that the cause of the collapse was neurocardiogenic syncope and that he had suffered a concussion when his head hit the ice earlier. He was released from the hospital on October 11, 2010.

All content from Kiddle encyclopedia articles (including the article images and facts) can be freely used under Attribution-ShareAlike license, unless stated otherwise. Cite this article:
Ondřej Pavelec Facts for Kids. Kiddle Encyclopedia.