Operated as a living museum, this organization is quite different from most traditional collections and displays of Canadian militaria. Almost every vehicle in the museum’s collection is operational, or in some state of repair or restoration. Many vehicles including the vintage Sherman Mark IV, Chaffee, M60 and Sheridan tanks, armoured personnel carriers, trucks and jeeps are frequently driven in parades and other ceremonial activities involving The Ontarios or other units of the Canadian Forces. Since most of these vehicles are ‘runners’, the museum's staff and maintainers are slightly less reluctant to let people climb onto and into their prized pieces than most museum curators. From time to time, a patron may even experience a ride first-hand.

The funding required to restore, maintain, and fuel the museum’s historic vehicle collection and static displays is provided entirely by volunteers—current and former members of the Canadian Forces, veterans, cadets and civilians alike. The museum raises some its operating funds by providing the use of some vehicles for select recognizable Canadian and international television or film productions. The task of restoring and maintaining such a large collection of antique vehicles is extremely resource-intensive, often physically strenuous and very expensive. Many of the Museum's collection of unrestored or under-repair vehicles are visible from Stevenson Rd N, the road leading into the south field of the Oshawa Executive Airport lands. 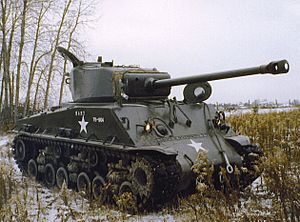 The Museum has a large number of armoured vehicles in its collection ranging from a motorcycle to jeeps, carry-alls, carriers and tanks. Aside from fully restored Bren Gun Carrier and M24 Chaffee, a pair of M4A2(76)W HVSS, and one unrestored Centurion, there are also a number of foreign-operated vehicles including a Scania HLVW prototype that went unprocured by the Canadian Forces in the 1980s. Several Ferrets are still in operation, along with an FV433 Abbot SPG self-propelled gun provided by the British Army Training Unit Suffield (BATUS) detachment at Suffield, Alberta.

Two M60A3s dwarf almost everything else, although the two M551A1 Sheridans are deceptively large. A number of ex-US Army M113A2s are maintained and driven regularly, as are the M113C&R Lynx. Softskin vehicles include a number of examples of different Canadian military pattern vehicles, as well as many jeeps and a couple of nice examples of the M37. M62 wreckers which are frequently employed to move the larger vehicles, turrets, or chassis and engine and components around the facility. Many other post-war trucks are also on display. 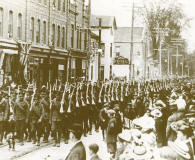 Apart from its Historic Vehicle Section, the museum's volunteers painstakingly maintain Static Display Section consisting of militaria including uniforms, medals, photographs, diaries, historical books and artifacts relevant to the history of the Regiment, the Royal Canadian Armoured Corps, and the Canadian Army from the 1850s to present day. These artifacts are displayed in diorama settings depicting their era of use. Among the medals displayed include those of past members of the Ontario Regiment, including the original Order of Canada awarded to its longest-serving Honorary Colonel RS (Sam) McLaughlin.

The museum is located at 1000 Stevenson Road North in Oshawa. It offers group tours by appointment, and general admission if by donation.

All content from Kiddle encyclopedia articles (including the article images and facts) can be freely used under Attribution-ShareAlike license, unless stated otherwise. Cite this article:
Ontario Regiment RCAC Regimental Museum Facts for Kids. Kiddle Encyclopedia.