Oplismenus hirtellus (commonly known as basket grass) is a flowering perennial plant from the family Poaceae that can be found on every continent in the world except Antarctica, growing mostly in coastal tropic and subtropic regions as well as tropical and subtropical islands such as Hawaii, New Zealand, Australia and Madagascar. 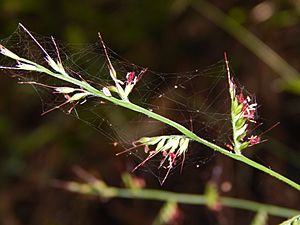 The species flowering stalk is located 200 millimetres (7.9 in) above the leaves with the sticky purple colored awns. Flowers appear from December to June. It grows 0.3 metres (1 ft 0 in) high and has some hairs which have 10-15 nerves on either side. The plant is whitish on the lower surface and is very narrow near midrib.

It is self-pollinated plant which seeds attract various animals and birds. The sticky seeds are easily distributed by animals and humans, easily adhering to fur and clothing.

There has been some disagreement about the taxonomic classification of non-native Oplismenus in several states: 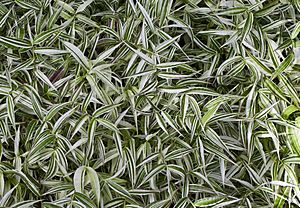 All content from Kiddle encyclopedia articles (including the article images and facts) can be freely used under Attribution-ShareAlike license, unless stated otherwise. Cite this article:
Oplismenus hirtellus Facts for Kids. Kiddle Encyclopedia.