Ora Banda is a townsite, now a virtual ghost town, located 66 kilometres (41 mi) north-west of Kalgoorlie. According to folklore, the town name is Spanish meaning "band of gold".

Gold was discovered in the district in 1893 and in 1909 the Ora Banda Progress Committee requested the Government make additional lots available, but it was 1911 before a decision was made to declare a townsite there The survey of lots was made in 1911, and the townsite gazetted in 1912. By 1910 there were approximately 2,000 miners and their families living in the area. The town had two stores, two butchers, two bakers, a town hall, dining halls, a post office, a police station, churches, boarding houses and billiards saloons.

The once famous Huntington Mills Bank was situated there. Which in its time it was the largest bank in the Southern Hemisphere. In 1911 the Ora Banda Hotel was constructed by Alfred E Garnett using stone and brick.

On 17 June 1913, Eileen Walls (13yrs old) led a procession of school children up the main street, and had the honour of cutting the ribbon and so officially opened the Ora Banda State Battery. The five head battery ran three shifts and in 1936 another five head had to be added. 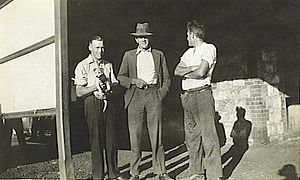 The Ora Banda Hotel was the place to meet up.

Today's goldmining companies are still working the same sites discovered nearly a century ago, and on the outskirts of town you will find the Ora Banda State Battery which is still used to crush ore.

Annually in September the population swells for a day for the Ora Banda Race Day. The race track is opposite the historical Ora Banda Inn.

All content from Kiddle encyclopedia articles (including the article images and facts) can be freely used under Attribution-ShareAlike license, unless stated otherwise. Cite this article:
Ora Banda, Western Australia Facts for Kids. Kiddle Encyclopedia.