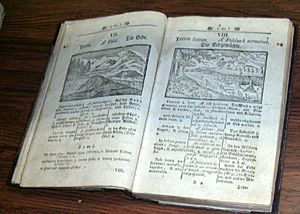 A late 18th-century reprint of Orbis Pictus, published in Pressburg/Pozsony, Kingdom of Hungary. This edition is in four languages: Latin, Hungarian, German and Czech)

Orbis Pictus, or Orbis Sensualium Pictus (Visible World in Pictures), is a textbook for children written by Czech educator John Amos Comenius and published in 1658. It was the first widely used children's textbook with pictures, published first in Latin and German and later republished in many European languages. The revolutionary book quickly spread around Europe and became the defining children's textbook for centuries.

The book is divided into chapters illustrated by copperplate prints, which are described in the accompanying text. In most editions, the text is given in both Latin and the child's native language. The book has 150 chapters and covers a wide range of subjects:

All content from Kiddle encyclopedia articles (including the article images and facts) can be freely used under Attribution-ShareAlike license, unless stated otherwise. Cite this article:
Orbis Pictus Facts for Kids. Kiddle Encyclopedia.