Orenco (or en koh) is a former company town in Washington County, Oregon, United States, located between Hillsboro and Aloha. The former community of Orenco now forms the Orenco neighborhood in Hillsboro, which is the site of the Orenco Station housing development.

The community was established in 1905 as a company town by the Oregon Nursery Company, within a 1200-acre (4.9 km2) area owned by the company. The name Orenco is a composite of the company's initials. The Oregon Electric Railway established Orenco Station in 1908, and Orenco post office operated from 1909 to 1963. Of the original town, the church, a gas station, general store, and many original dwellings are still standing today. The Oregon Nursery Company shut down during the depression. Orenco later became part of Hillsboro. The company was responsible for introducing the Orenco Apple, a dessert apple, in the early 20th Century.

Orenco is located in the Tualatin Valley, with Rock Creek and other smaller streams running through the area. Major roads in the area include U.S. Route 26, Cornelius Pass Road, Cornell Road, NW 231st Avenue, and Baseline Road.

Orenco's approximate location is northeast Hillsboro, north of Baseline Road, south of Cornell Road, west of Cornelius Pass Road, and east of Shute Road. Unlike the town of Orenco, the present-day neighborhood of the same name extends north of Cornell Road, with the Orenco Station area.

European American pioneers first arrived in the Orenco area in the mid-1850s, after the Donation Land Claim Act of 1850 encouraged settlers to travel to Oregon. The Orenco area was cleared by Chinese laborers employed by a number of local farmers.

At the turn of the century Archibald McGill and Malcolm McDonald formed the Oregon Nursery Company. In May 1906, the Oregon Nursery Company purchased 170 acres (0.69 km2) in Washington County, Oregon where they would begin building a large nursery operation. In 1908, the town of Orenco was founded with the suggestion of the name coming from Anna Lisky McNew. The townsite was largely on the Donation Land Claim of William H. Bennett. Also in 1908, the Oregon Electric Railway began service on its line between Forest Grove and Portland. The Orenco school district was formed on December 21, split from the Shute school district. Many of the first families in the town were Hungarians the company recruited and relocated from the Eastern European country. In 1909, the Orenco Presbyterian Church was founded in June. By 1910 the town had grown to over 500 residents and on December 6 the community organized a volunteer fire department.

H. V. Meade began printing the town’s paper, the Orenco Herald in 1914. The next year Orenco built its city hall that contained both the fire department and a jail. Enrollment at the school district reached 169 students by 1913. On January 6, 1913, the residents voted to incorporate the community. At this time the city consisted of a dry goods store, a hotel, two grocery stores, a blacksmith shop, a hardware store, a lumber yard, ice cream parlor, and a printing shop. Services in the town were water, sewer, telephones, electricity, street lighting, and a third-class post office.

In 1924, the city was the setting for a movie about the North-West Mounted Police by a Beaverton film studio. The Oregon Electric Railway closed its train depot in the town in August 1928. Then in 1929, the Great Depression helped lead to the dissolution of the Oregon Nursery Company. With this many other businesses shut down and many residents moved away and in 1938, residents voted to dissolve the municipal corporation.

Oregon Nursery Company founder Malcolm McDonald's home, listed on the National Register of Historic Places, is still located on the north end of the property that was formerly The Orenco Woods Golf Course. The golf course, which opened in 1953 and was owned and operated by the Hillsboro Elks Lodge, until it was sold to developers and closed in 2006. Due to the Great Recession, the land was not developed, and in 2013 it became the Orenco Woods Nature Park. 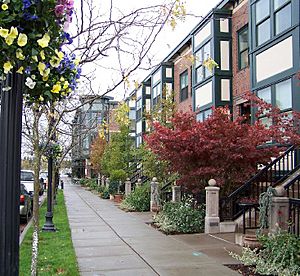 All content from Kiddle encyclopedia articles (including the article images and facts) can be freely used under Attribution-ShareAlike license, unless stated otherwise. Cite this article:
Orenco, Oregon Facts for Kids. Kiddle Encyclopedia.