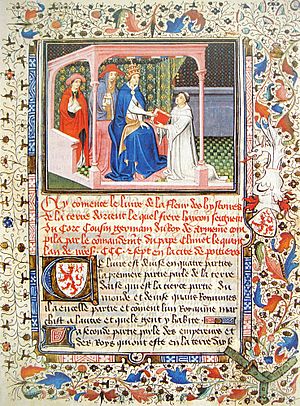 Hayton of Corycus remitting his report on the Mongols, to Pope Clement V, in 1307.

Oriental studies include Near Eastern and Far Eastern societies and cultures, languages, and peoples and their histories; in recent years the term Asian studies has mostly replaced the older term. European study of the region had primarily religious origins, which has remained an important motivation until recent times.

All content from Kiddle encyclopedia articles (including the article images and facts) can be freely used under Attribution-ShareAlike license, unless stated otherwise. Cite this article:
Oriental studies Facts for Kids. Kiddle Encyclopedia.