Born in Boden, Sweden, Sundqvist played within the Skellefteå organization at both their club youth and professional levels. After being drafted in the third round, 81st overall, by the Pittsburgh Penguins, Sundqvist won a silver medal with Sweden men's national junior ice hockey team at the 2014 World Junior Ice Hockey Championships.

Upon moving to North America, Sundqvist spent three seasons within the Penguins organization, with whom he won the 2016 Stanley Cup. Sundqvist was traded to the St. Louis Blues during the 2017 NHL Entry Draft. While with the Blues, Sundqvist built upon his earlier success and helped the team win their first Stanley Cup in franchise history.

Sundqvist was born on 23 March 1994 in Boden, Sweden. Growing up in Sweden, Sundqvist played within the Skellefteå organization in their club youth levels. He chose to play for Skellefteå after the hockey gymnasium school in Luleå showed little interest. Sundqvist recorded 22 goals and 54 points in 41 games with the Skellefteå's Junior team before being drafted in the third round, 81st overall, by the Pittsburgh Penguins in the 2012 NHL Entry Draft. The Penguins were originally skeptical of Sundqvist due to his size and lack of visibility due to his location, but conceded after encouragement from European scout Tommy Westlund. Penguins assistant director of amateur scouting Randy Sexton praised Sundqvist following the draft by saying "He's big, he's rangy, he skates and plays very hard. He's got good hands close to the net and he can finish. He's a Penguin." After his selection, Sundqvist was invited to the Penguins' Prospect Development Camp before returning to his home country where he made his Swedish Elite League (SEL) debut with Skellefteå on 24 October 2012 against Frölunda HC. He scored his first career SHL goal in a game against Frölunda HC on 5 January 2013. He completed his rookie campaign with the team recording one point in 14 games.

During the summer prior to the 2013–14 season, Sundqvist was invited to participate in the Penguins' Prospect Development Camp at the Consol Energy Center. He also joined the team for their preseason games, during which head coach Mike Johnston said "He's a very good prospect... He's got size, he's good both ways, he's responsible, so he's going to be a very good player for this organization." Upon returning to his home country for the season, Sundqvist was selected to compete with Sweden men's national junior ice hockey team at the 2014 World Junior Ice Hockey Championships. He scored the game winning goal in the third period against Russia to help send Sweden to the gold medal round against Finland, although they ended the tournament with a silver medal. He returned to Skellefteå where he helped them win the 2014 Swedish Championship by recording six points in 13 playoff games.

Following the conclusion of the SHL season, the Penguins signed Sundqvist to a three-year, entry-level contract. After attending the Penguins training camp, he was returned to Skellefteå AIK on 7 October 2014 for the 2014–15 season. In his last season in the Swedish league, Sundqvist recorded a career high nine goals and 19 points, but was often recovering from injuries. During a game in December, Sundqvist took a puck to the wrist and was forced to leave a game early. A few months later, Sundqvist took a hit to the face by Janne Jalasvaara during a game and was forced to miss time to recover. Sundqvist said that he had "lost the feeling all over my face, still have no feeling on my nose and under my eye."

On 27 April 2015, following the completion of the 2014–15 SHL season, Sundqvist began his North American professional career after being re-assigned to the Penguins' American Hockey League (AHL) affiliate, the Wilkes-Barre/Scranton Penguins. He played one game with the Penguins during their Calder Cup Playoff run. 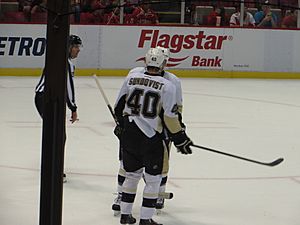 Sundqvist with the Pittsburgh Penguins at Joe Louis Arena in 2015.

During the offseason, Sundqvist chose to remain in North America rather than return home to train. When reflecting on his decision, Sundqvist said "It's a big difference....I mean, last year I came here and I played between 6-10 games. Now I came here and haven't played any games, so I feel a big difference." Leading up to the 2015–16 season, Sundqvist was vying for the Penguins' fourth line center position. Due to a hamstring injury, Sundqvist was unable to participate at the Penguins summer development camp but was healthy enough for their training camp. After attending the Penguins training camp, Sundqvist was shortly assigned to the Wilkes-Barre/Scranton Penguins before being recalled to the NHL prior to the 2015–16 opening night. The reason for the shortlived promotion was for salary relief for players on their injured reserve list. Upon returning to the Wilkes-Barre/Scranton Penguins in the AHL, Sundqvist played on the team's third line alongside Dominik Uher and Tom Kostopoulos. He was recalled to the NHL on 4 February 2016 and made his NHL debut the next day in a loss to the Tampa Bay Lightning. He scored his first career NHL goal in a 5–0 win over the New York Islanders on 2 April, scoring the first goal of the first period within the periods first 13 minutes. Sundqvist appeared in 18 games for the team during the regular season, as well as two postseason games, as the Penguins went on to win the Stanley Cup, defeating the San Jose Sharks in six games. Sundqvist did not play in the finals or in enough regular season games to get his name on the Stanley Cup; however, Pittsburgh honored him with a Stanley Cup ring and a day with the Cup.

After attending the Penguins training camp prior to the 2016–17 season, Sundqvist was again re-assigned to the AHL. This season proved to be his strongest in the AHL, setting new career highs in both goals and points. Early on in the season, he surpassed his previous career high in goals by his 16th game. While playing in a game against the Hershey Bears on 10 December 2016, Sundqvist became the third Penguin in franchise history to record four goals in a game. He spent the majority of the season in the AHL, earning his first recall on March 10 after 53 games. In order to join the Penguins in Edmonton for their game against the Oilers, he traveled from Wilkes-Barre to New York, to Toronto, to Edmonton, arriving in the city late Thursday. He went pointless during the game but provided a screen for Ian Cole's game winning goal the following night against the Vancouver Canucks. Upon returning to the AHL, his offensive output helped lift the Wilkes-Barre/Scranton and they became the first team in the league to reach 100 points, with Sundqvist recording three points during the game for a total of 103 in his career. Following this game, Sundqvist was recalled to the NHL with teammates Jean-Sébastien Dea and Derrick Pouliot to play in the Penguins final game of the season. As a result of his offensive outburst, Sundqvist was one of three Penguins players to surpass 20 goals during the season. He concluded his AHL season with a career-high 20 goals and 46 points despite spending parts of the season in the NHL.

During the 2017 NHL Entry Draft, Sundqvist and the Penguins' first-round pick were traded to the St. Louis Blues in exchange for Ryan Reaves and their second-round pick. He signed a one year, $675,000 contract with the Blues before making their opening night roster for the 2017–18 season. He appeared in 30 games for the team until he was reassigned to their AHL affiliate, the San Antonio Rampage, on 31 January. His stint in the AHL was shortlived and he spent the majority of the 2017–18 season with the Blues, appearing in 42 games altogether. In those 42 games, Sundqvist recorded a career high five points while playing on the fourth line and averaged nearly a minute on the penalty kill. 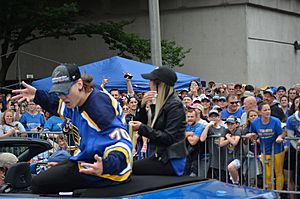 Sundqvist during the 2019 Stanley Cup parade

Following his career-best season, Sundqvist and the Blues agreed to another one-year contract worth $700,000, instead of opting for free agency. While playing with the St. Louis Blues during the 2018 pre-season, Sundqvist suffered a head injury as a result of a hit from Washington Capitals player Tom Wilson, who was subsequently suspended. Sundqvist was immediately placed on the team's injured reserve to recover but returned to the lineup on 25 October after missing eight games. Upon his return, he made an immediate impact on the Blues lineup, matching his career goal total of two during a game against the Vegas Golden Knights and surpassing it a game later. In spite of his hot start, by 2 January 2019, the Blues were in last place around the entire league, which resulted in a coaching and goaltender change. Along with the changes, Sundqvist recorded a career-high 31 points in 71 games to help the Blues qualify for the 2019 Stanley Cup playoffs. During their playoff run, coach Craig Berube praised Sundqvist by calling him a "good player and penalty killer" and saying he "does a lot of good things for us on both sides of the puck." Prior to the 2019 Stanley Cup Finals against the Boston Bruins, Sundqvist averaged 15:55 minutes of ice time and recorded nine points in 21 post season games.

Throughout the Finals, Sundqvist played with Ivan Barbashev and Alexander Steen on the Blues' fourth line against Patrice Bergeron's line. Following a Game 1 loss, Sundqvist delivered an elbow to the head of Bruins defenceman Matt Grzelcyk, causing him to leave the game. At the time, Sundqvist received a two-minute minor penalty but was later suspended one game by the NHL's department of player safety. Upon returning from his suspension, Sundqvist helped the Blues win their first Stanley Cup in franchise history.

On March 19, 2021, Sundqvist left a game against the San Jose Sharks with a lower-body injury. The following day, it was announced that Sundqvist had torn his ACL in his left knee, and would miss the remainder of the 2020–21 season. During the 2021–22 season, he recorded four goals and 11 assists in 41 games with the Blues.

On March 21, 2022, Sundqvist was traded to the Detroit Red Wings, along with Jake Walman, and a second-round pick in 2023 NHL Entry Draft, in exchange for Nick Leddy and Luke Witkowski

Sundqvist is cousin with television presenter and reporter Jessica Almenäs who represented Sweden in Miss World 1998.

All content from Kiddle encyclopedia articles (including the article images and facts) can be freely used under Attribution-ShareAlike license, unless stated otherwise. Cite this article:
Oskar Sundqvist Facts for Kids. Kiddle Encyclopedia.