Ward Island with Oso Bay in the background 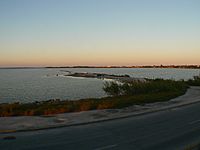 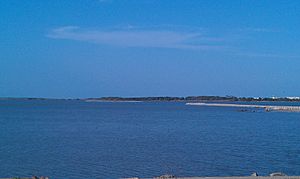 Oso Bay's sea floor consists of mostly mud, ooze, and oyster reefs, which is discouraging for swimming. The depth of the main bay and an old, abandoned railroad structure along with the abundance of oysters and vegetation promote fishing. Birding and hiking are popular activities along the wildlife refuge on the North shore of Oso Bay. Boating, kayaking, and kite surfing are also some attractions to Oso Bay.

Surf fishing, or wade fishing, is a popular activity in Oso Bay due to its shallow depth. Species of fish in Oso Bay include

Live Shrimp and artificial lures are commonly used for fishing in the area.

Oso Bay is home to the Hans and Pat Suter Wildlife Refuge which is considered to be one of the best sea bird watching areas in the world. Some of the birds regularly found in the on and around Oso Bay are

All content from Kiddle encyclopedia articles (including the article images and facts) can be freely used under Attribution-ShareAlike license, unless stated otherwise. Cite this article:
Oso Bay Facts for Kids. Kiddle Encyclopedia.